In the case of Frank Lloyd Wright’s Hillside Theatre at Taliesin, there are some Pyrex-glass window tubes and thousands of roof tiles. The window tubes are thought to be related to the SC Johnson Research Tower, designed in 1943/44 and constructed 1947-1950, according to Kyle Dockery, Collections Coordinator for the Frank Lloyd Wright Foundation. The Tower has 17.5 miles of the tube windows (the Administration Building, designed in 1936 has 43 miles of the window tubes).

Dockery says there are between 30,000-50,000 clay roof tiles which were made by Ludowici Roof Tiles for the Theatre.

“They were removed and replaced with the rolled rubber roofing in 1968 after a stack of extra tiles which had been set aside to repair the roof fell over and damaged a truck. The structure of the roof meant that the tiles needed constant maintenance and replacement so plenty of extras were kept on hand.” 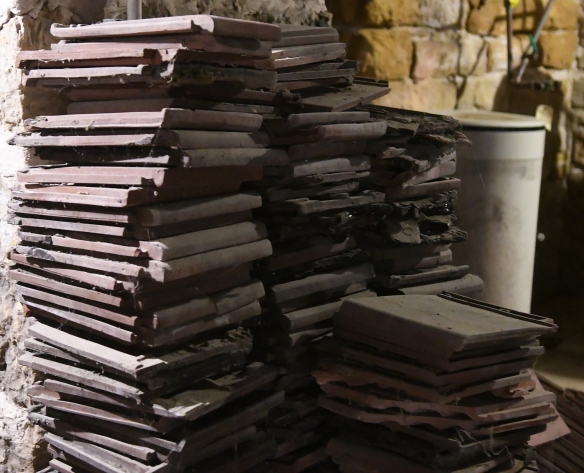