Bill Orkild, the Wizard of Penwern, the magnificent estate that Frank Lloyd Wright designed for Fred B. Jones on Delavan Lake, Wisconsin in 1900 – 1903, invited us to an open house a few weeks ago. The occasion was to show off the new / old gate lodge greenhouse constructed this year. It replicates the original one which was demolished in 1983. I give Orkild that monniker because he is the construction master of virtually every phase of Penwern’s rehabilitation since Sue and John Major became its stewards in 1994.

The visit also challenged me to see Penwern with fresh eyes, six months after my last visit. Arches are one of of the design themes of the grounds…this photo of the 28′ arch which spans the front porch, facing the lake, was a new angle for me, even after dozens of visits to Penwern. I also looked at the dormers on the west side of the house differently, as we sat by the pool and enjoyed a picnic lunch: 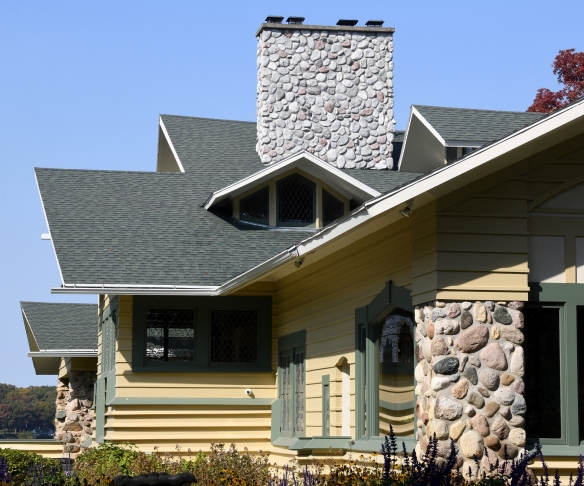 Now, onto the greenhouse! The structure is virtually identical to the commercially – built one which Wright included in his design. The new one is an entertainment venue, rather than a greenhouse for growing flowers (Jones loved growing roses). It is surrounded on the east side by a semi-circular boulder wall, another recreated feature of the estate. Bob Hartmann, an architectural archaelogical sleuth from Racine, noticed the wall on the plans and commented that half the wall was missing. Say no more to the Majors and Orkild, there is a full wall again! 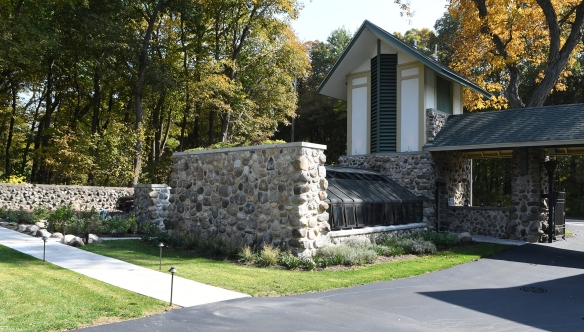 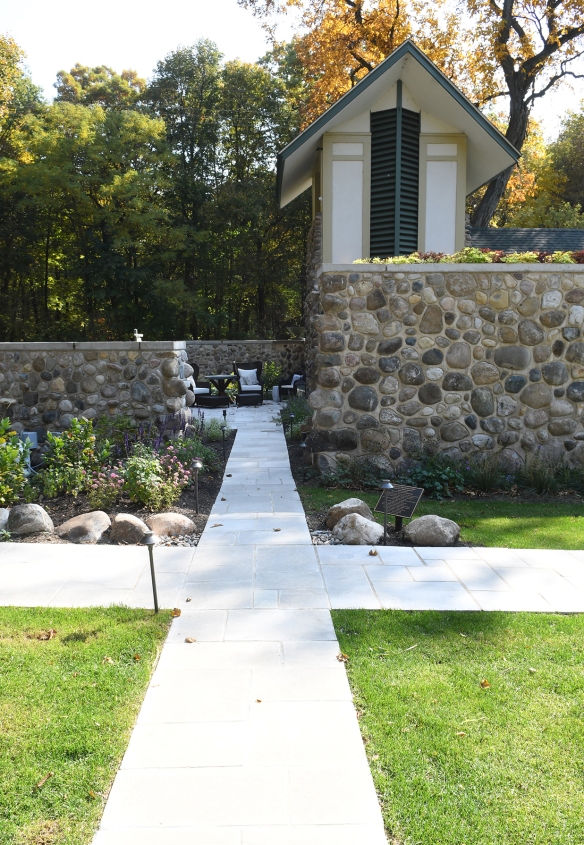 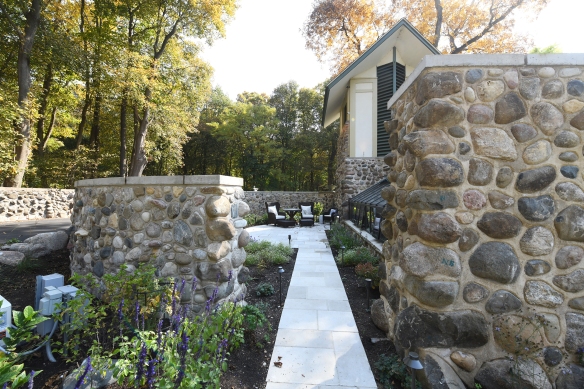 There are now flowers in a planter atop the north wall at the end of the greenhouse. Orkild speculates that the original wall and greenhouse may have failed for lack of a liner to keep water from the plants from seeping down and weakening the structures. 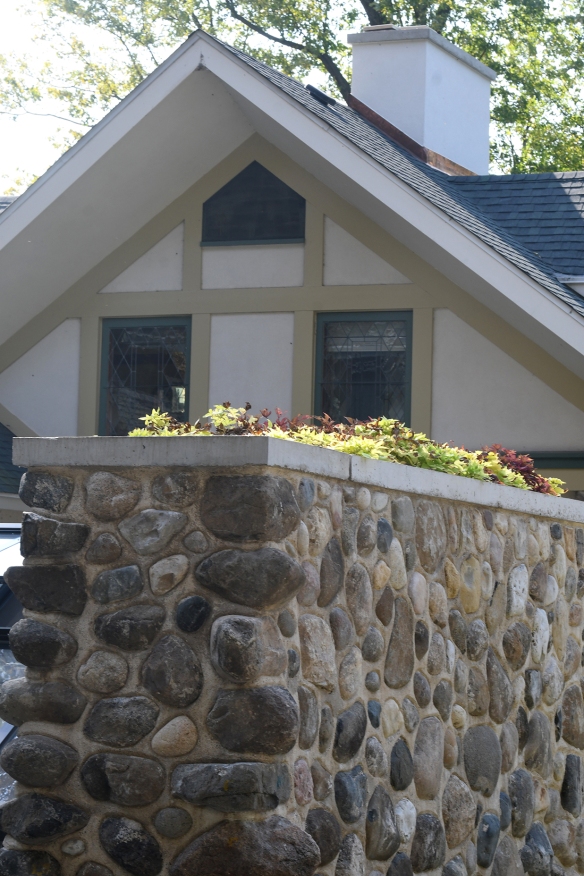 Now, invitations in hand, let’s go into the greenhouse: 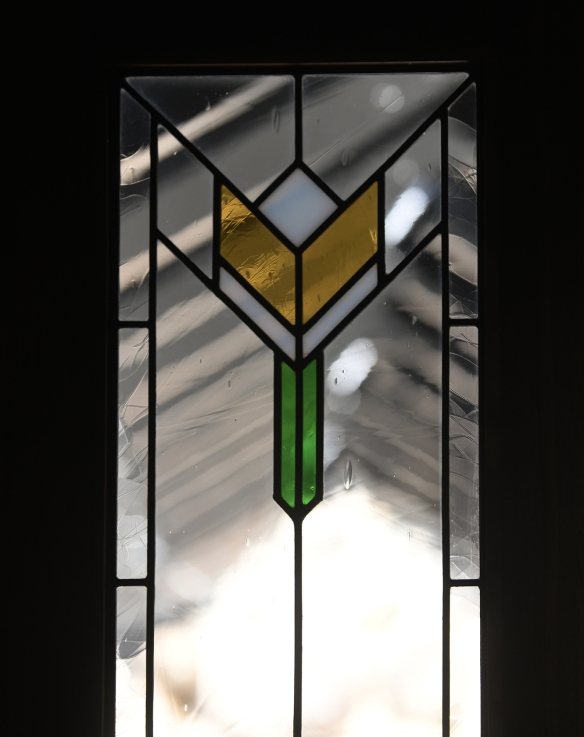 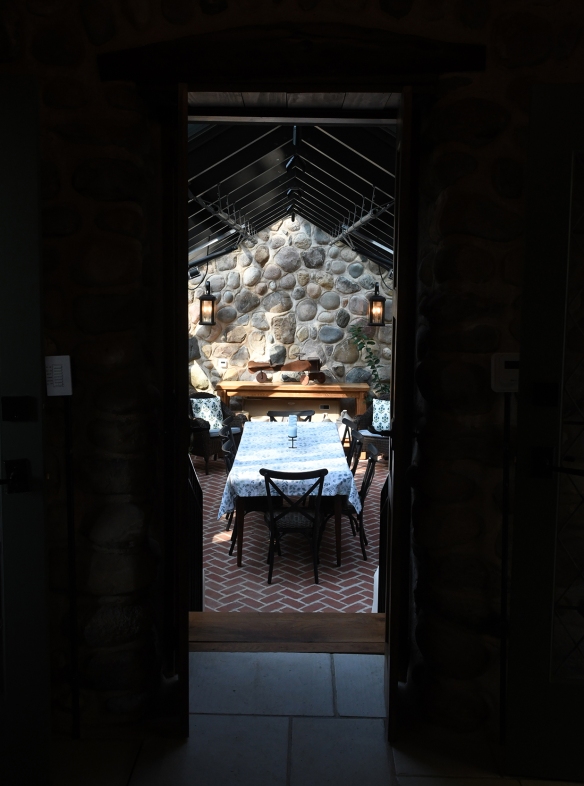 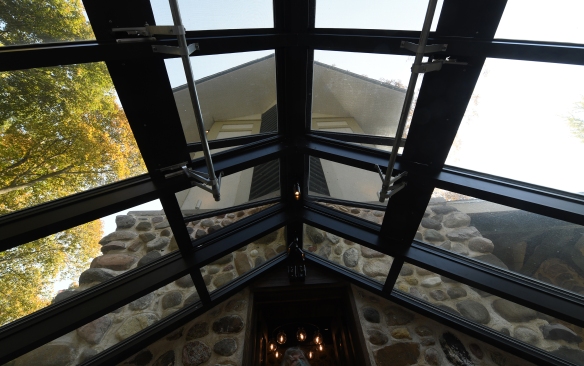 The design on the windows leading to the new space is reprised on the corners of the counters in the food preparation area:

One of Orkild’s great contributions to preserving Penwern’s history is the museum he is creating in the stable:

The work at the gate lodge included the arduous task of scraping off concrete that had been added atop boulders on the walls of the gate lodge water tower as cracks developed over the last 115 years: 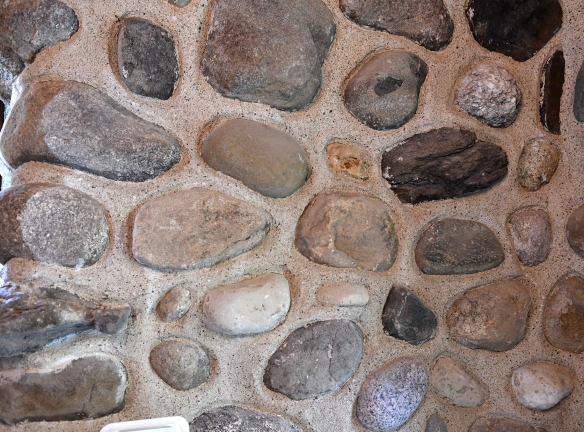 Orkild found an unexpected artifact, a pipe, 12″ into this wall. The pipe is now in the museum. He theorizes that either a mason put his pipe down and forgot about it, or one of his co-workers, annoyed by the smoke, took the pipe, and ensured that it could not be found (or smoked) again.

This oak table, below, is another recent addition to the museum. The piece of wood from an alder tree is signficant, because one of the possible meanings of “penwern” in the native Welsh is “at the head of the alder tree.” 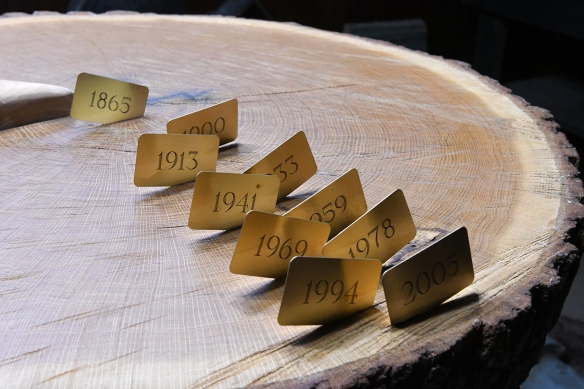 Orkild’s wry sense of humor shows in this new display:

Wizards sometimes don’t show their faces. I offer only this wizard’s shadow as he stands by the stable gate explaining some of the work he has done:

Recreating the greenhouse was a team effort, and the Majors credited all who had a hand in it with a plaque outside the new structure:

3 thoughts on “Taking a Fresh Look at Penwern”