“The Winslow House had burst on the view of that provincial suburb like the Primavera in full bloom. It was a new world to Oak Park and River Forest. That house became an attraction, far and near. Incessantly it was courted and admired. Ridiculed, too, of course. Ridicule is always modeled on the opposite side of that shield. The first house soon began to sift the sheep from the goats in this fashion.” – From Frank Lloyd Wright’s “An Autobiography,” P. 152 of the 1977 Horizon Press edition.

I opened the 1963 Horizon Press edition of the Frank Lloyd Wright Wasmuth Portfolio which my dear friend Gene Szymczak (steward of the Hardy House) gave me a few months before he died, when I began writing this piece. The first three of the 100 plates are the landmark house he designed for William Winslow (1893, River Forest, Illinois, T.9305): 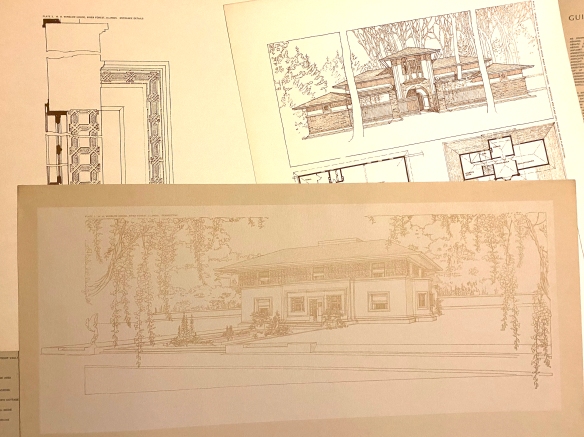 What were you doing when you were 26 years old? As for Frank Lloyd Wright, well, he “shook out of his sleeve” a landmark house.* The Winslow House was not his first commission, but it was the first one he could proclaim as his. He had quit or been dismissed from Adler & Sullivan, and no longer had to hide behind Cecil Corwin’s name or Adler & Sullivan’s names (the latter, as in the case of the James Charnley House – Chicago, 1891, T.9101). I was given the privilege of photographing the house two weeks ago by its stewards who I am not naming, to protect their privacy.

This post was originally going to be solely dedicated to my recent Winslow House photos, but it evolved as I thought about Tim Samuelson’s “Wright Before the Lloyd” exhibition at the Elmhurst Art Museum. The exhibition includes a large photograph of the front of the Charnley House. I knew I would be photographing Winslow soon when I saw the exhibition. When I looked at the photo below, I thought that the entrance to Charnley was a bit like what Wright would design for Winslow two years later. Looking at the square windows on the third floor of Charnley also made me think of the windows that flank the front door of Winslow.

As I looked at my 2014 photos of Charnley this evening, I saw enough to make me think that some of Charnley’s details seem to lay the groundwork for some of Winslow details. Since I started exploring this thesis and emailing scholars, they have affirmed my notion that in some respects Charnley can indeed be considered a rough draft of what Wright would do for his first client after he hung out his architect’s shingle. 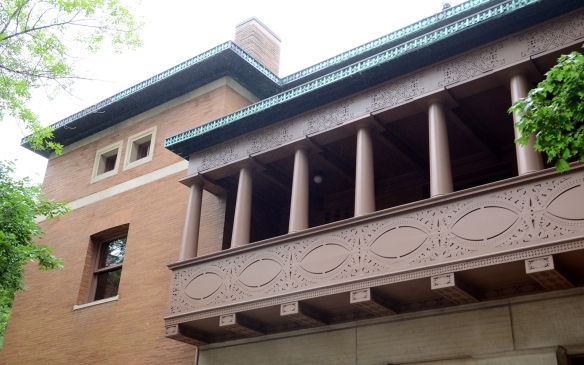 And, the front doors, both highly oranmented (although Winslow is not as stylized as the more narrow Charnley door): 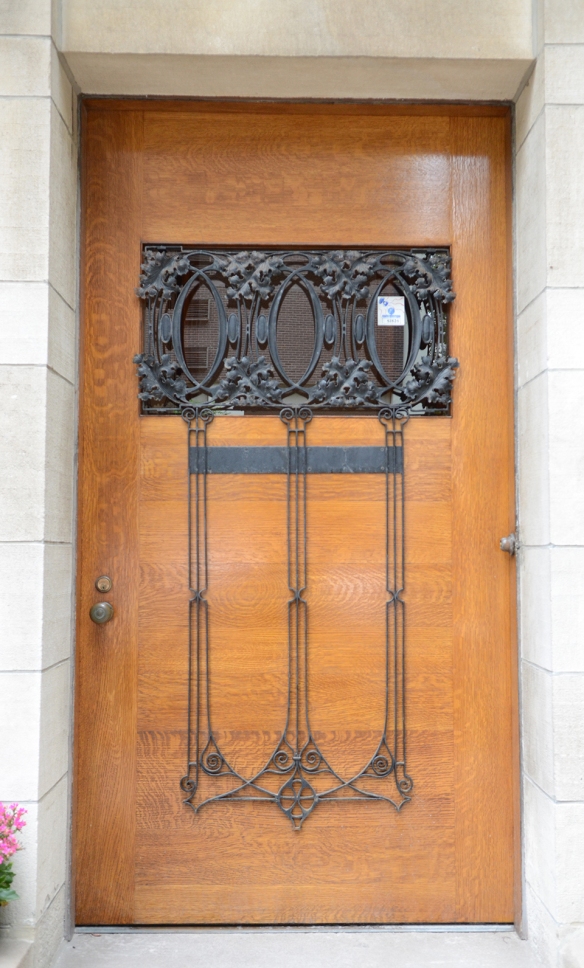 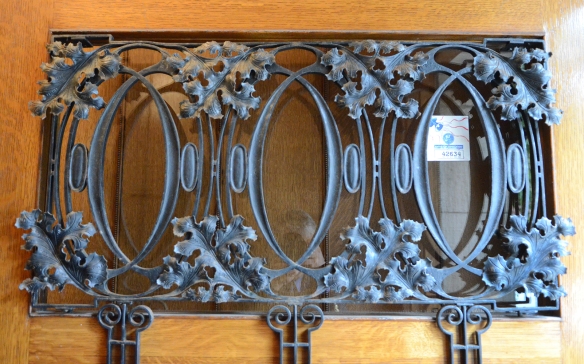 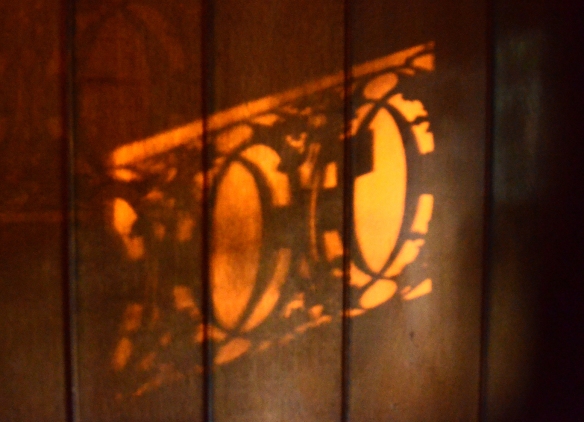 And what about the arches that flank the inglenook and fireplaces that warm us after entering each house? In each house the left arch precedes a staircase. First, Charnley, then Winslow (Winslow is undergoing interior restoration which is why some wall surfaces are unfinished): 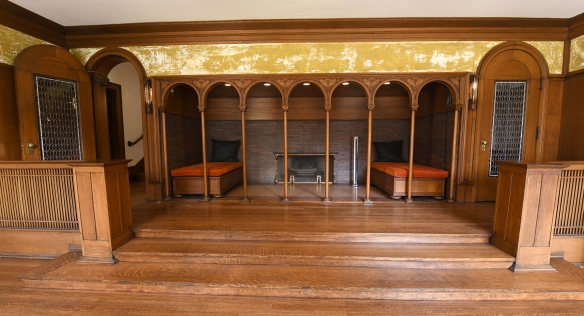 Arched passageways, first in Charnley, then in Winslow: 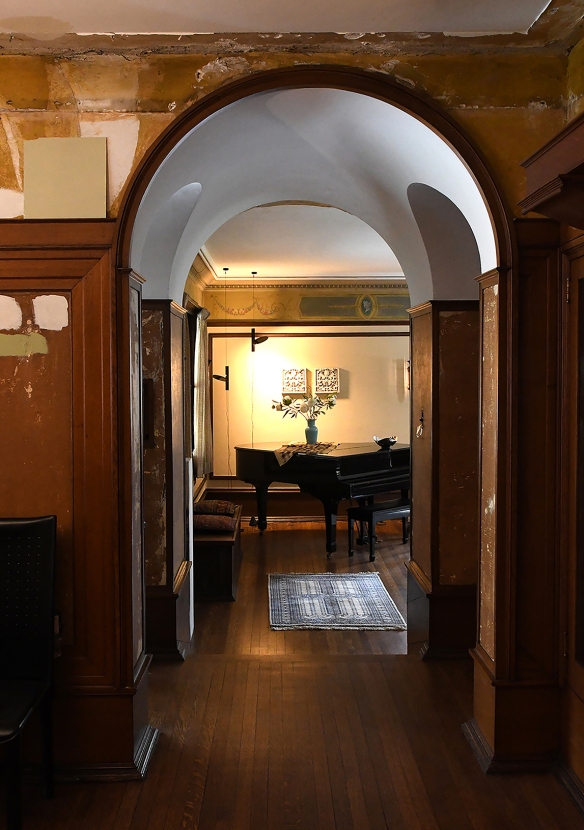 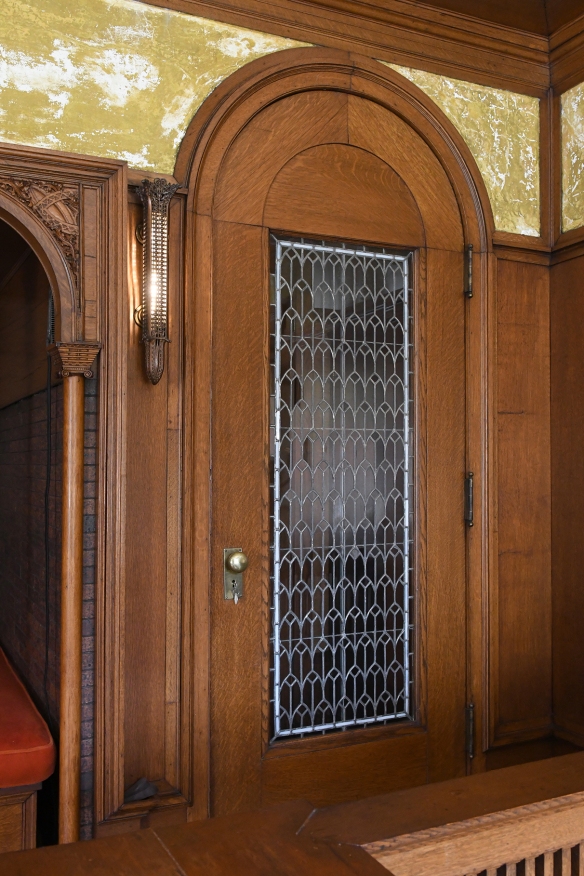 Unlike Winslow, Charnley has an atrium, but both have wood screens on their staircases: 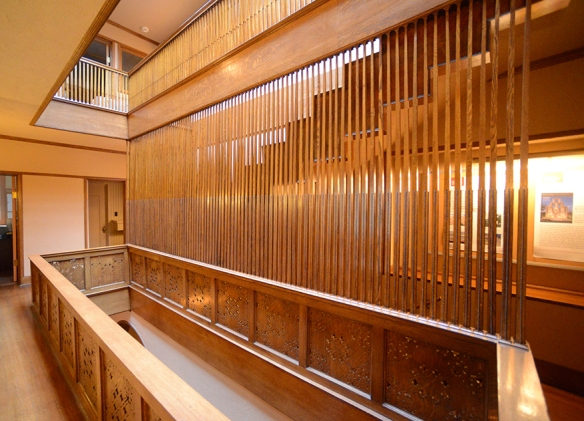 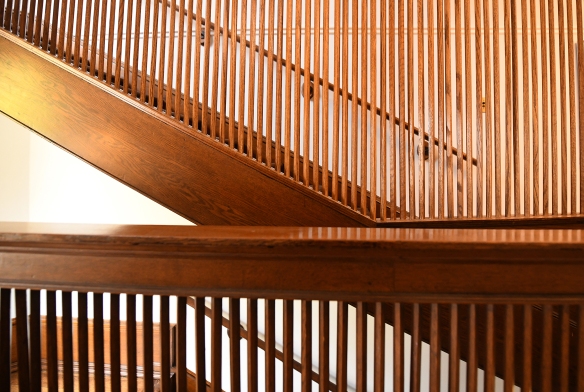 After those comparisons of Charnley and Winslow, I return to the original theme of this post, a photo gallery of my new Winslow photos: 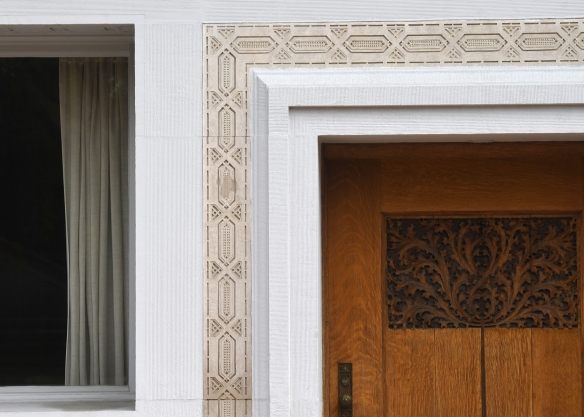 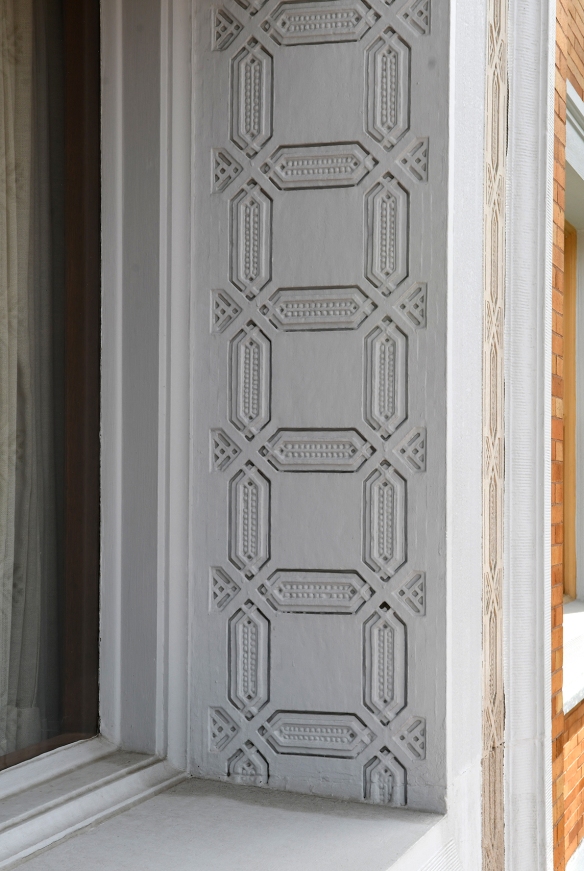 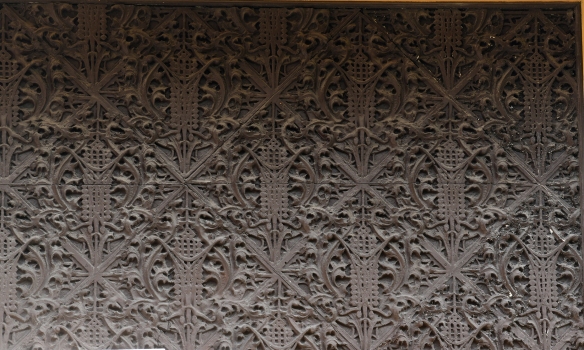 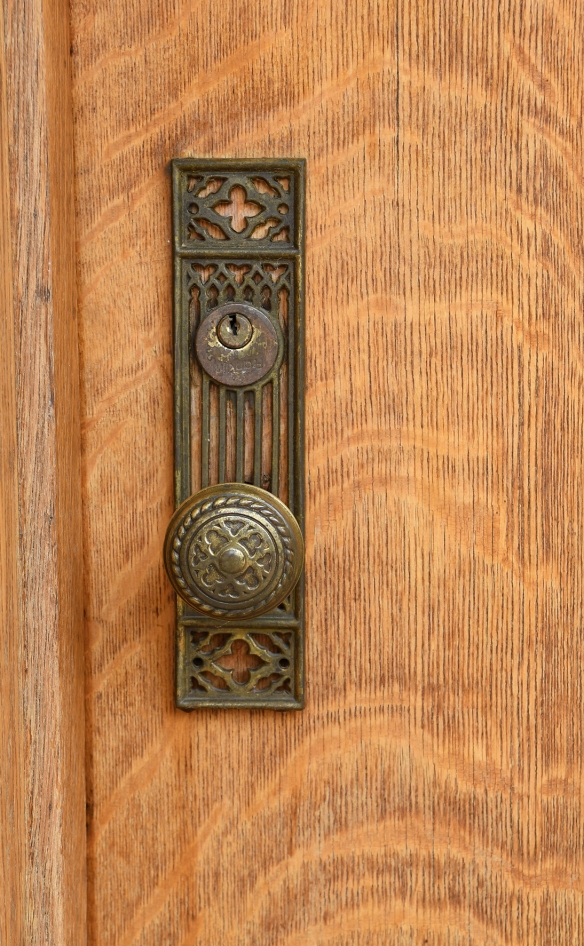 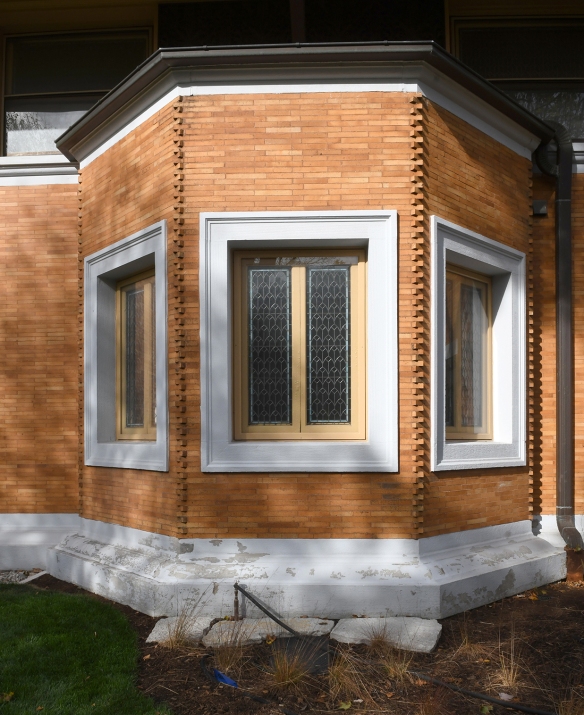 Back inside the house, we start at the inglenook again:

This original thermometer (Winslow was a metal fabricator) still works: 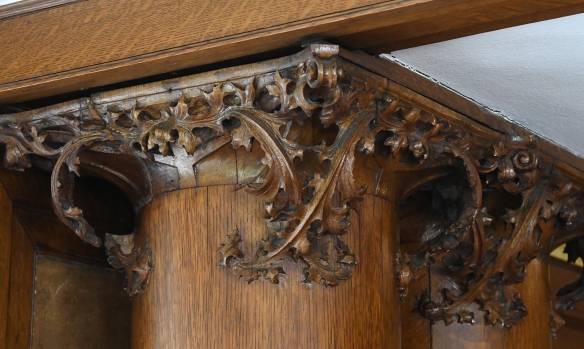 I am not showing many interior spaces, to respect the stewards’ privacy: 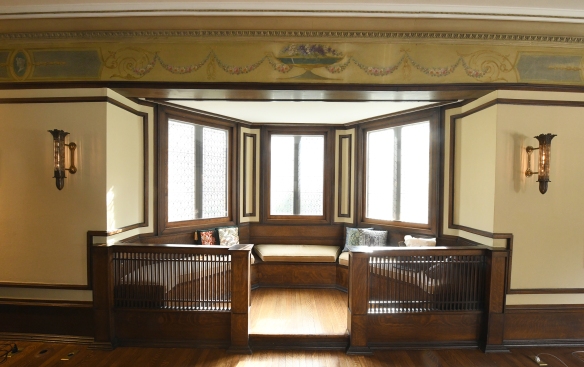 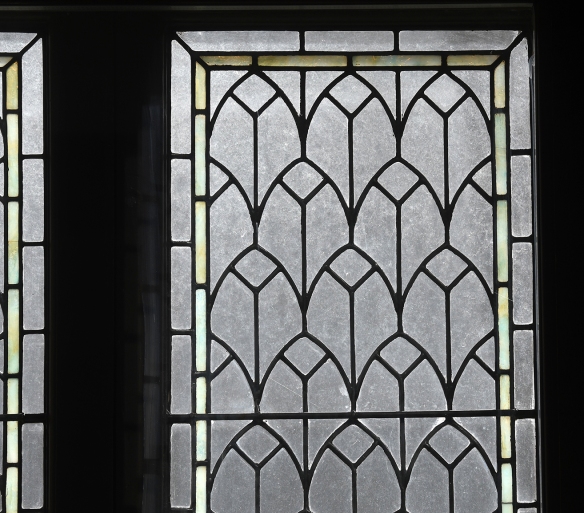 One of my favorite features of the house is the octagonal staircase in the stair tower: 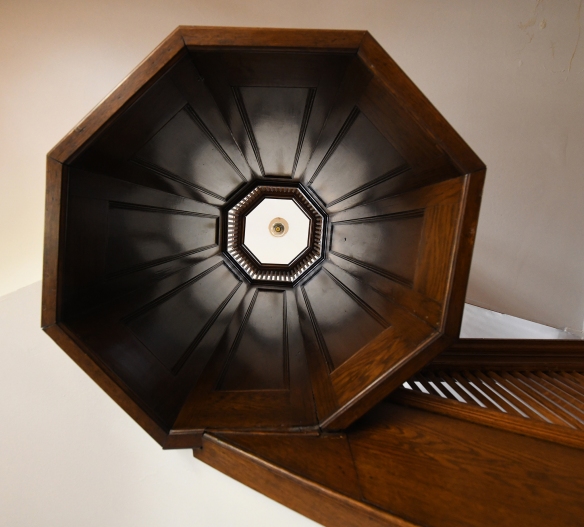 Allow me one more comparison, to the ceiling in the drafting room at the Home and Studio (Oake Park, 1897, T.9506)…both are octagonal: 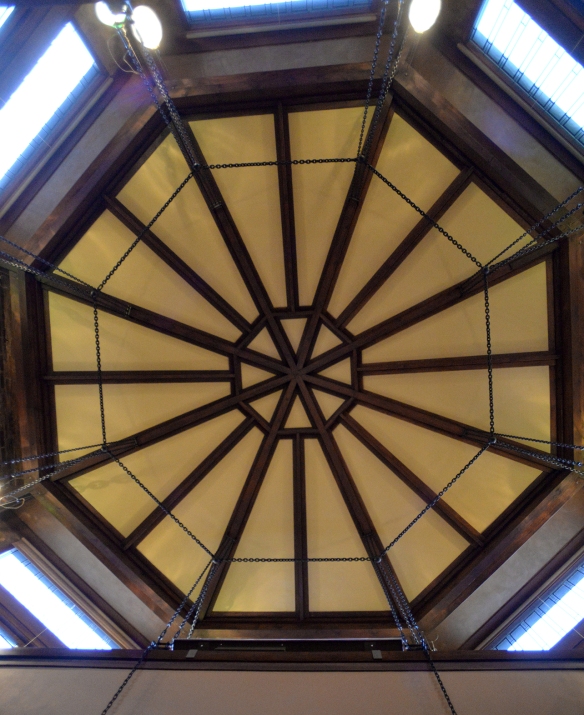 The stable, first viewed through the dining room bay windows and through the windows on the rear stair tower: 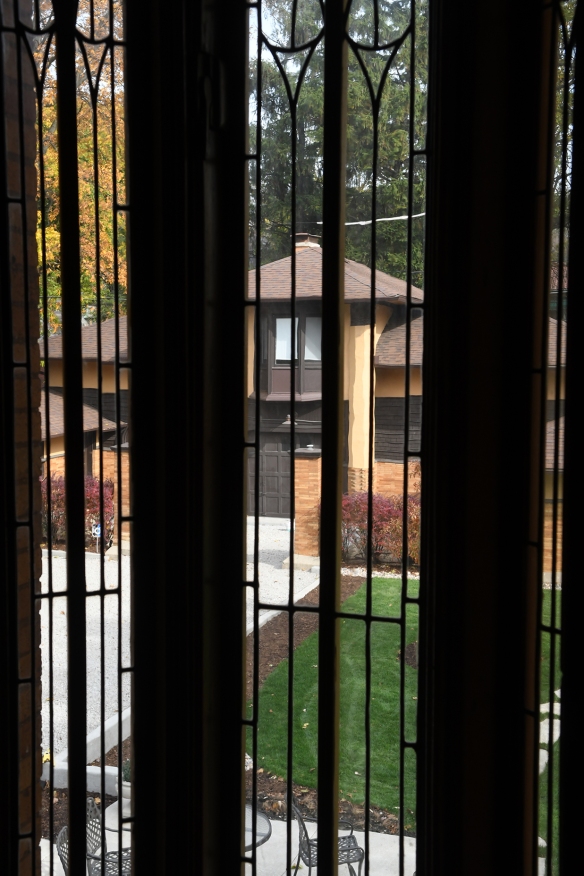 The stable, framed by the porte-cochère: 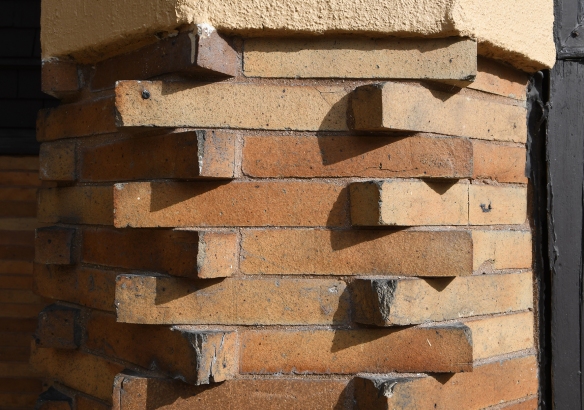 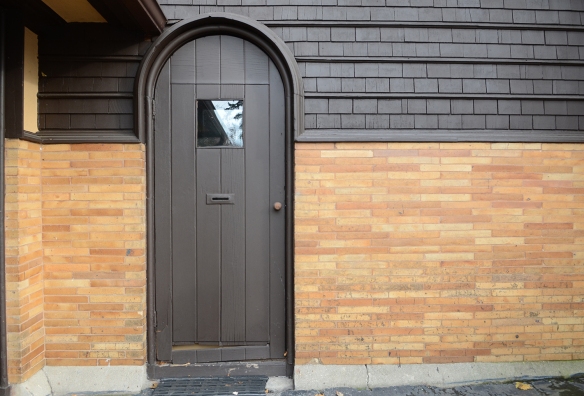 I photographed the fireplace in Unity House (at Unity Temple) a few weeks ago. Heidi Ruehle told me that there supposed to be a mural around the fireplace. Unadorned, it made me think of the entry to the Winslow House where I would be taking pictures that afternoon:

“When I first laid eyes on the Winslow House from the street (as a 22-year-old architecture student), I felt like I was in a church, the presence viewed from the street was so powerful. I don’t think I have ever seen a Wright building that impacted me in that manner. It was a powerful experience.” – Randolph C. Henning, architect and Frank Lloyd Wright author and scholar, in an interview with the author, November 10, 2020.

*There are numerous references in the Wright literature to him “shaking” designs “out of his sleeve.”

The stewards of the Winslow House sent me this link to a comparison between Charnley and Winslow after I wrote them that my essay was turning in that direction:

“Wright Before the Lloyd” Exhibition at the Elmhurst, Illinois, Art Museum: