The late Prof. William R. Drennan’s 2007 Death in a Prairie House: Frank Lloyd Wright and the Taliesin Murders (Madison: Terrace Books) is again a topic of discussion on Facebook’s “The Wright Attitude” group. The book has many fans, as evinced by its continuing sales in Frank Lloyd Wright gift shops, 14 years later. 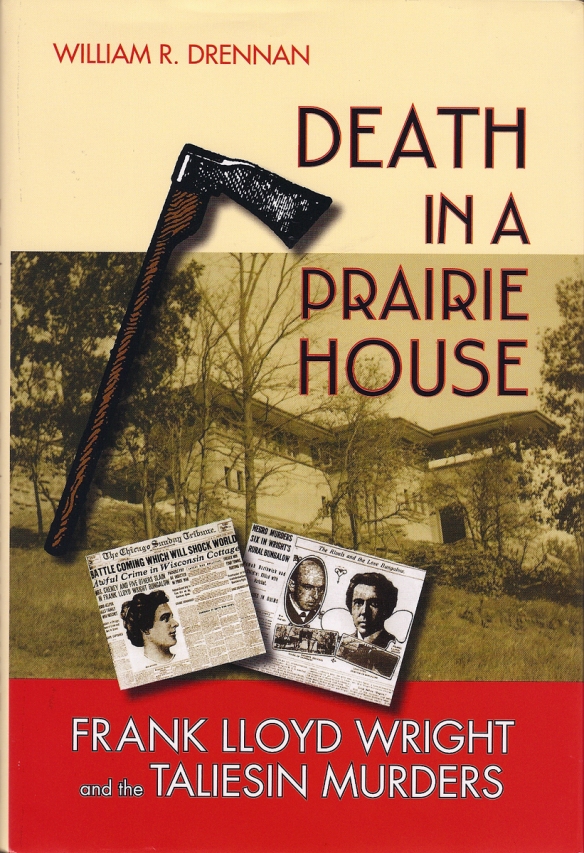 A group member recently posted about excitement about having bought the book. Other group members wrote how much they liked the book. I was sent a review copy of the book when it was published. I read it eagerly, and did, indeed review it on my website, but, likely to the consternation of the author and publisher, I panned it. I was taken to task about my review by one of Prof. Drennan’s acquaintances, but I stand by my critique now, 14 years later. After I commented on the Facebook thread that the book is replete with inaccuracies, I was asked to elaborate on my assertion. That is the genesis of this article.

I sent my 2007 review to a Wright scholar before posting this update. I wanted to get a sense whether it was a fair review, considering that Prof. Drennan has died and cannot defend his work. I was told it is an accurate review. In fact, it was pointed out that I missed a significant shortcoming in the book, Prof. Drennan relying on inaccurate floor plans of Taliesin I, rather than Wright’s own, so that his positioning of the victims at the time of the massacre is inaccurate.

“The biggest and most notable was that Prof. Drennan didn’t understand Taliesin I. He had the book, Wright Studies, V. 1, in the bibliography but it was obvious the guy hadn’t actually read that book, particularly Anthony Alofsin’s essay on Taliesin I, in which Alofsin identified what he thought was the most accurate Taliesin I floor plan. Prof. Drennan relied on the plan that Storrer created, and the drawing created for In the Nature of Materials. Neither of them showed a garden (with a parapet – just to the south of the living quarters.”

Because the book keeps on selling and presumably is taken as fact by many readers, I am reprinting my review below.

I was taken aback that a manuscript from a university professor, with many supporting end notes, had so many shortcomings. I am still taken aback by its popularity given its shortcomings. I have one new observation. Sloppy writing and sloppy editing, which should have addressed the sloppy writing, weaken the book significantly. As a journalist it drives me batty that Prof. Drennan did not follow common style of using a person’s full name on first reference and last name only on subsequent references. Wright is referred to alternately as Frank Lloyd Wright, Frank (!), Frank Wright (!), and Wright. Julian Carlton is referred to as both Carlton and Julian. Wright’s partner at Taliesin is Mamah Borthwick Cheney, and then Mamah Cheney and Mamah. One of the victims of the attack is alternately Herbert Fritz and Herb Fritz. In 2007 I did not catch that Prof. Drennan also misspelled Alfonso Iannelli’s name (as Ianelli).

The 2007 review, with slight revisions:

Death in a Prairie House tells a riveting crime story, although the certain motive for the crime still remains a mystery. Prof. Drennan’s account of the brutal attacks weaves together conflicting eyewitness accounts and contemporary newspaper stories. Julian Carlton massacred Mamah Borthwick, Frank Lloyd Wright’s lover; her two children; and four others at Taliesin on August 15, 1914.  Carlton, who was a servant at Taliesin, drank muriatic acid as searchers closed in on his hiding place after the murders. He died in jail several weeks later, before he could be tried, so there has never been a definitive record of what happened, and why. There still is not. 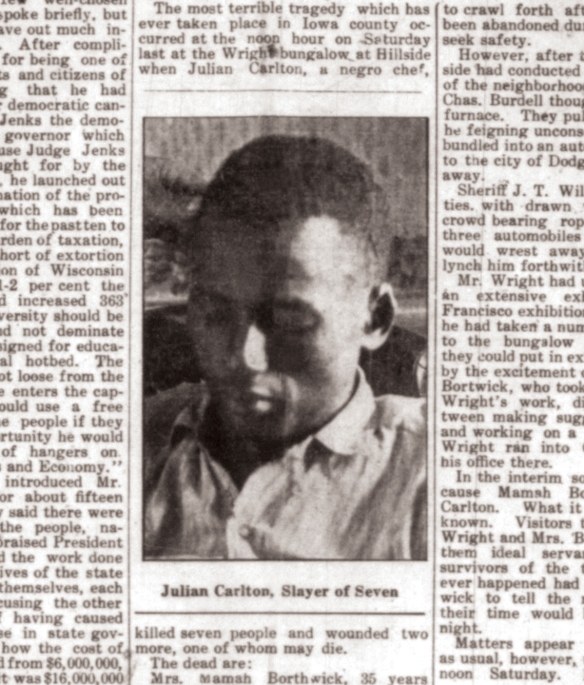 Literally the first half of the book (84 pages) takes the reader through Wright’s parents’ unhappy marriage, and divorce; and then through Wright’s escape from his work and his own marriage, when he and Borthwick went to Europe in 1909. These chapters of Wright’s life set the stage for the building of Taliesin for readers who know little about Wright; they are familiar for readers who have pored through any number of other books about the him.

Prof. Drennan writes in the Prologue about the “outrage” in Spring Green that Wright’s paramour was living in his “love cottage.”  He ends the Prologue asking, “What could Frank Lloyd Wright have been thinking?”  I expect that kind of question from a television news anchor, but not from a scholar at the beginning of a book. Readers can form such questions on their own, rather than have them spelled out for them. The book is extensively footnoted (168 pages of narrative are followed by 35 pages of end notes), but it is weakened by conjecture and by errors.

Prof. Drennan asserts that Wright designed the Charnley House in Chicago. That is subject to speculation, with many scholars of the opinion that Wright was executing Louis Sullivan’s ideas, rather than his own. Prof. Drennan incorrectly writes in a photo caption that Richard Bok’s “Flower in the Crannied Wall” sculpture at Taliesin was executed by Alphonso Iannelli at Midway Gardens. On the last page, he writes that Wright’s daughter, Iovanna, had his body disinterred from its grave at Taliesin, cremated, and his ashes mixed in with those of Olgivanna Wright, his third wife, at Taliesin West, in Arizona. That did happen, but it was done as one of the dying Olgivanna’s last wishes, according to her physician, not on Iovanna’s whim, as the author implies. Prof. Drennan relies heavily on Brendan Gill’s biography of Wright (Many Masks: A Life of Frank Lloyd Wright, New York: De Capo Press: 1998), a book that some Wright scholars say is based on too much speculation.

Although Ed Gein (said to be the inspiration for the character of Norman Bates in Psycho) and Jeffrey Dahmer are better known and notorious mass murders in Wisconsin, Prof. Drennan opines that Carlton’s killings were more significant in the annals of Wisconsin crime. When he finally begins his account of the murders, it is with the admonition that “so much remains a mystery; there are no definitive answers to motive, logistics, time.”  He writes, on page 101, regarding a suggested timeline of the murders [and inaccurately perpetuates the myth that Carlton was serving soup], “And yet it must be true.” However, he hedges in the next sentence, “Or at least something like it must be true…”

Not only are the three dozen pages of endnotes are cumbersome to read but there are no indicators in the text that send you to the end notes. Prof. Drennan writes in one on page 189 that since writing the narrative, he has reason to believe that he may not be correct in his description of some of the layout of the house. Why didn’t he correct the manuscript rather than cast doubt on his writing in an endnote that takes up more than a full page?

Prof. Drennan sometimes introduces facts and ideas without explaining their context. For example, on page 35 we are introduced to William Winslow. The reader does not learn for another page that Wright’s first realized independent commission, the spectacular Winslow House, was built for his “neighbor” Winslow [and were they really “neighbors?”]. The reader is never told what an important house the Winslow House is. Prof. Drennan does not explain Wright’s ideas about the Prairie style until page 38, several pages after we have been told about his new style of architecture. He gives us the pronunciation of “Mamah” and “Cheney” only on page 41, 34 pages after we first read her name. He does not acknowledge that she dropped her married name in favor of her maiden name (Borthwick) except in a single photo caption. We are told that Wright learned of the murders in a phone call from “Frank Roth in Madison.” We never learn who Frank Roth was, or why he was charged with calling Wright with the news.

There is a paucity of illustrations. The book, most notably, does not include floor plans of the house which would help the reader visualize where the murders took place, as Carlton laid his hatchet into his victim’s skulls. A photograph of the living room at Taliesin refers to the “Wrightian” hearth. That implies that it is in the style of “Wright.” Who, but Wright, would have designed it? There are hard-to-read reproductions of newspaper accounts of the massacre and fire, but no photographs of the ruins of the house.

Prof. Drennan’s thesis is that Wright’s work became “markedly (and understandably) more insular, more labyrinthine, even more fortress-like” after the fire and murders at Taliesin. Therefore, he continues, “the slaughter at Taliesin may well have exerted a significant influence on American residential design throughout the remainder of the twentieth century.”  It is a dramatic theory, but it is not accurate.

Wright did not abandon the Prairie-style because of the murders. He wrote in his Autobiography that he was frustrated by both his work and marriage, when he closed a chapter in his career in 1909 and left for Europe. Wright had published a short article, “A Fireproof [my emphasis] House for $5000” in the Ladies Home Journal in 1907, seven years before Carlton burned Taliesin down. Many of the homes he designed after the murders did not have prominent front doors, as Prof. Drennan points out, but neither did many of the ones he designed before the murders.

Prof. Drennan describes the Freeman House, a concrete block home designed in Los Angeles in 1924 as “aggressively vertical, thumbing its nose at Emerson’s old hunger for the horizontal line.” The site for the Freeman House allows for nothing but an “aggressively vertical” design. The concrete used in the five Los Angeles homes represented an evolution in Wright’s design work, not a reaction to the crimes. He designed his landmark concrete Unity Temple and the brick Larkin Administration Building a decade before the fire and murders at Taliesin. They are as fortress-like from the outside, and fireproof, as Prof. Drennan asserts Wright’s post-1914 designs became. Finally, the Usonian homes designed after the 1930s, as well as Fallingwater and Wingspread, are no less organic and inviting than Wright’s Prairie-style work.

Should there still be any doubt about whether or not Wright significantly changed his designs after August 15, 1914, consider that when he rebuilt the smoldering Taliesin, he again used stucco and wood. In fact, the studio at Taliesin II (as Wright’s rebuilt home was referred to), burned down again, in 1925.

Death in a Prairie House succeeds in giving the reader probably every possible scenario of the massacre to consider. It falls short of its promise in other respects. 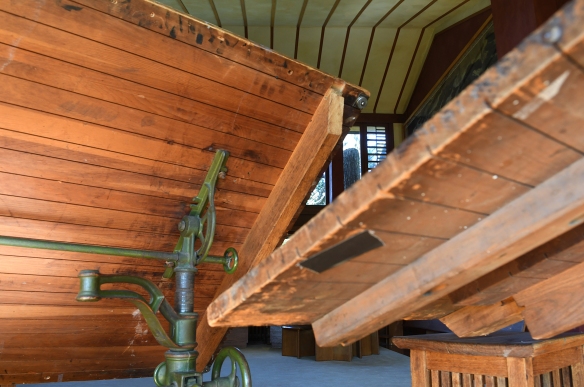 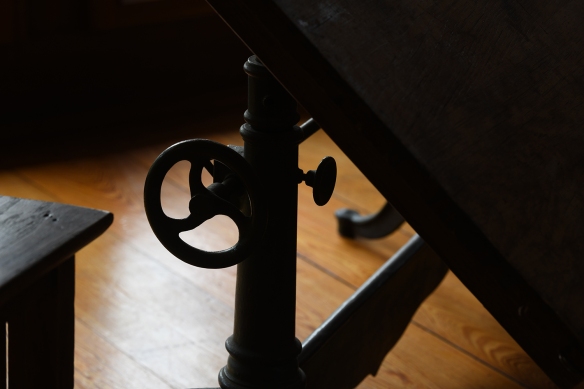 The original poster on The Wright Attitude wrote: “…even though I’m sure it’s puffery, it was in the biography/architecture/true crime category so who could resist?” And then, “Is it lurid? I kinda hope so.” Yes, Prof. Drennan’s book is wildly popular. I know how hard it is to write and research a book about historic events. As an author I do not like to denigrate another author’s work, but my advice is still to spend your money on any number of other books about August 15, 1914, that awful summer day at Taliesin. 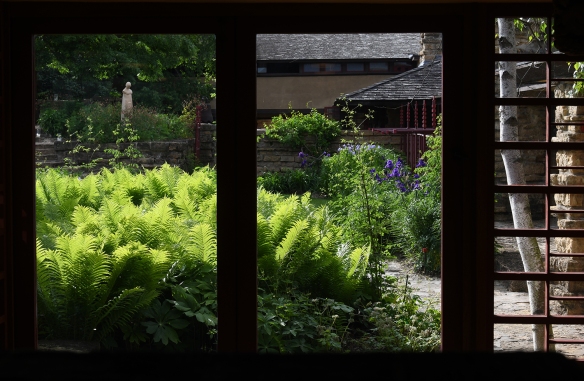 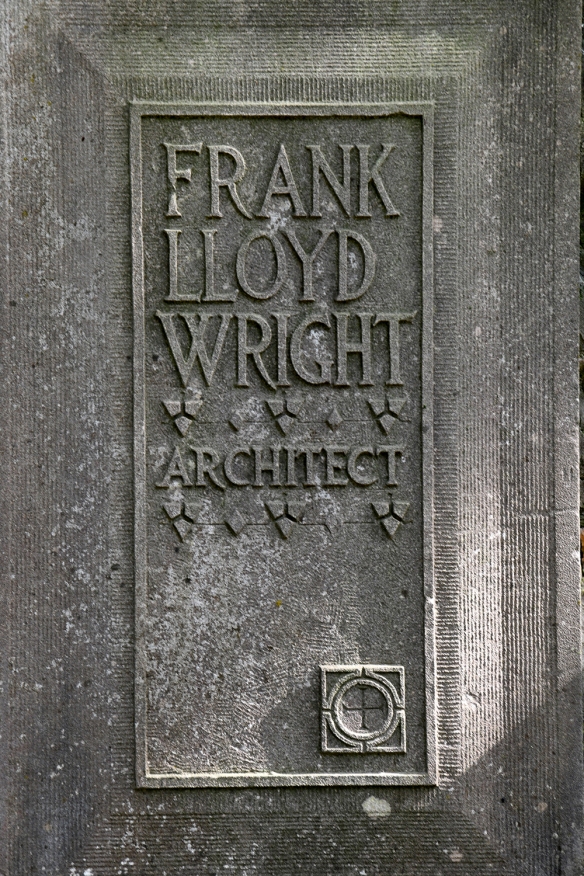 2 thoughts on “Revisiting Drennan’s “Death in a Prairie House””