One way to become steward of a home designed by Frank Lloyd Wright is to marry into it. That is how Bill Boyd came to be a steward of the Keland House in Mount Pleasant (Racine), Wisconsin in 1982. He joked with me that he was accused of marrying his late wife, Karen Johnson Boyd, for just that reason. She and her first husband had commissioned the house in 1954. Bill, who was properly called Dr. William B. Boyd, and WBB to those who worked with him, died peacefully Wednesday December 16 in his beloved Keland House after a short illness. He was 97. His dear Karen had died in the house in January 2016.

Bill told me that he had never seen a building designed by Wright until he came to Racine in 1980 for an interview to become the second president of The Johnson Foundation at Wingspread, the Johnson home that Karen grew up in. Wingspread was designed by Wright in  1937. The interview, with Karen’s brother, Sam, the president of SC Johnson, took place in Wright’s landmark SC Johnson Administration Building (1936). Bill summed up his initial reaction to Wright’s architecture in just three words, “I was smitten.”

Wright presented a Japanese print by the famous woodblock print artist Utagawa Hiroshige to H.F. Johnson Jr. when the family moved into Wingspread. The print hangs in the master bedroom in the Keland House: 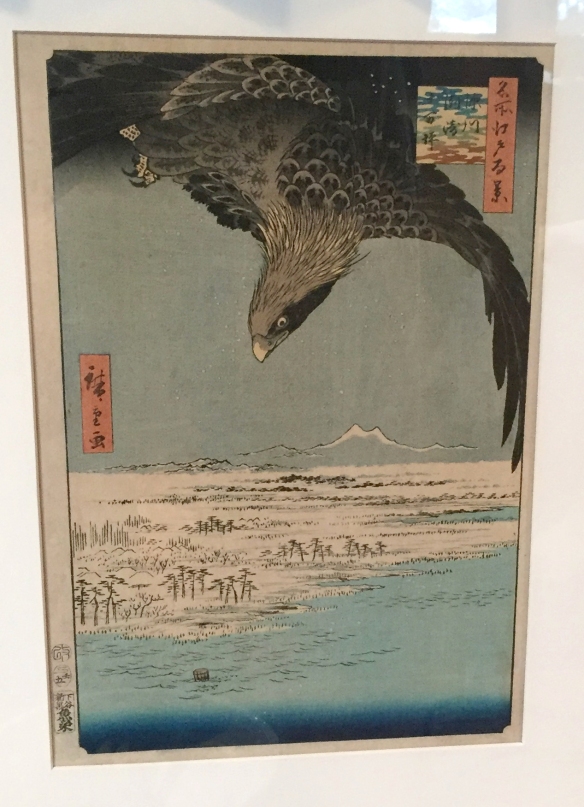 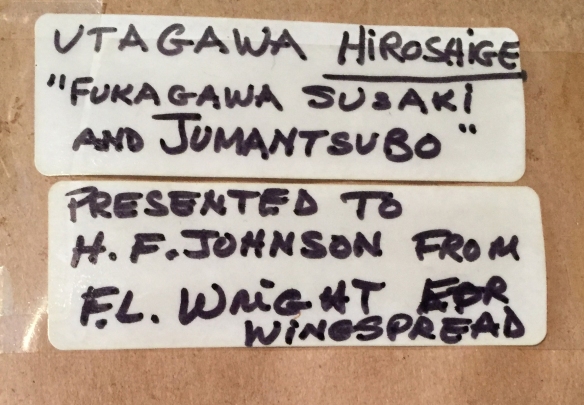 Bill missed an immersion into the World of Wright in the early 1950s, when he was studying for his Master’s degree at Emory College in Atlanta. He had applied for a position at Florida Southern College in Lakeland. Dr. Ludd Spivey, a teetotaler who commissioned Wright to design the college campus in 1938 (10 Wright-designed buildings were ultimately constructed), was in Atlanta. He invited Bill to a lunch interview. Dr. Spivey said, “Before we begin, I must ask you if you drink alcohol.” Bill replied, “I enjoy a drink now and then.” The interview was over. Bill was on his own for lunch after Dr. Spivey rose from the table, and declared “There is no point in our going on any further.” I told him I was glad he enjoyed a drink “now and then.” If he had gone to Florida Southern, I said, he may not have come to Wingspread, and I would not have met him.

He was not a dull academic. On the contrary, he had great joie de vivre. 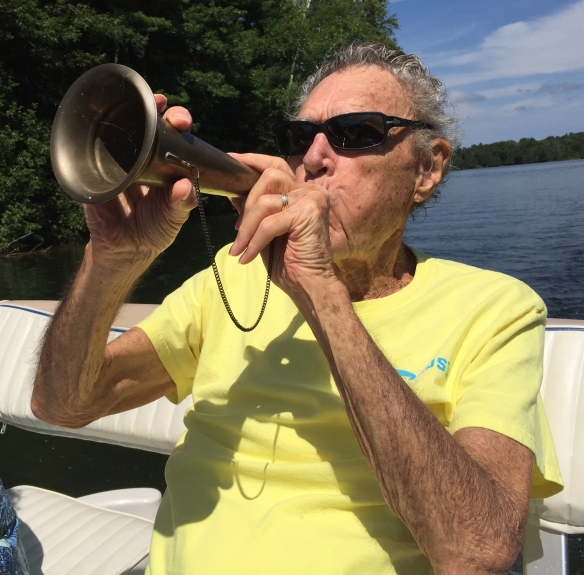 A Navy veteran of World War II and the Korean War, he grew up on the water near Charleston, South Carolina, and loved sailing both on Lake Michigan in Racine, and on Lake Superior in northern Wisconsin.

When the producers of the movie Animal House sought permission to film on campus at the University of Oregon, he gave his consent, recalling what he regarded as the short-sighted decision by the administration at UC-Berkley denying Mike Nichols permission to film The Graduate on their campus. His only proviso was that the school not be identified in the film. The famous scene with the horse in the president’s office was, indeed, filmed in his office. Karen once told me that her favorite scene of any movie she had seen was the food fight in Animal House. I profiled Bill and Animal House two years ago: 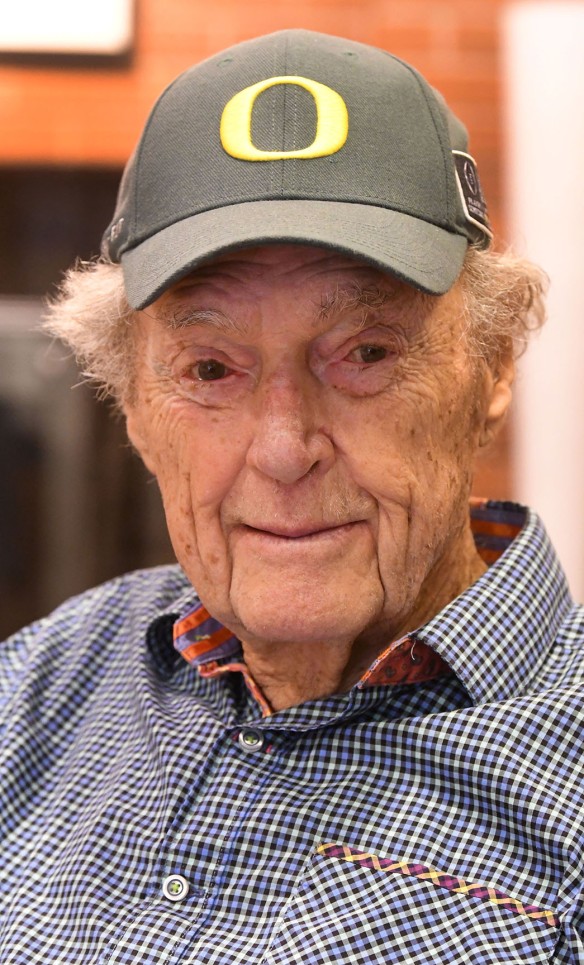 Bill had a great social conscience. He told me that he was angered by then-California Gov. Ronald Reagan’s attempts to stifle free speech at Berkley when Bill was the school’s Vice-Chancellor. At the press conference October 12, 1974 introducing him to the University of Oregon community, he said demonstrators outside were “ill-mannered … but manners are not the most important thing in life,” adding that sometimes “passion and tremendous concern for social justice” are just as important.

Buffy Sainte-Marie performed at the festivities surrounding Bill’s inauguration as President of Central Michigan University in 1969. The event was remembered 50 years later in a story online: Not often does a university president offer students an afternoon off from classes to attend an “informal ceremony,” a reception, and a concert performed by a legend of activism and folk music. Fifty years later, the Boyd inauguration is remembered as a notable moment in the history of Central Michigan University, when the students, the trustees, and the President opted to forego pomp and circumstance in favor of “a ‘swinging’ ceremony.” From:

He spoke with pride of clandestinely delivering what would have been deemed subversive material to a Jewish “refusenik” in Moscow during a conference in the Soviet Union in the 1980s.

He was passionate about Racine’s Kids First Fund. Wrote Marge Kozina, I have been very fortunate to have had the wonderful opportunity of working closely with William Boyd (Bill) for many years when I was executive director of the Racine Community Foundation (RCF) and Bill was a board member. He was the leading force, along with several others, in helping create and grow the Kids First Fund within the Foundation. Bill’s dedication and leadership in the early years have benefitted thousands of students and hundreds of teachers within the Racine Unified School District. He is deeply committed to enhancing the lives of others through education. Bill Boyd is one of the nicest and caring gentlemen I have ever met in my life.  Both Bill and Karen, each in their own special way, have made enormous efforts to bettering our community.

Journalist Clay Eals, who covered the University of Oregon for The (Portland) Oregonian newspaper, quoted part of Bill’s presidential inauguration speech in the January 18, 1976 edition of the newspaper. His remarks seem prescient today: A changed set of American expectations about life in the third century of the republic, the constricted state of the national economy, and the fears of a student generation viewing an anxious future from a normless present all pose challenges to the existing shape of the university….As usual in human affairs, discriminating judgments are required if human intellect and imagination are to prevail over temptations and anxieties.

In an email sent after he learned of Bill’s death, Eals called him “a reporter’s dream.” He included a clipping of a story about Bill being interviewed in the middle of a scandal in the athletic department. He opened his briefcase to refer to some papers only to find a pair of pants inside. “I’ve been trying to get them to the dry cleaners for a week,” he said. “And I haven’t had a clean shirt for days.”

Eals wrote to Bill in June 2020, including a copy of the last story he wrote for the newspaper in June 1980, a story about Bill that he wrote in longhand in his car, literally the night before leaving on a cross-country bicycle trip. Among my favorite news sources was you, and I had many occasions to cover stories in which you were an important, if not primary, source. Your cool informality, sense of humor, and way with words were most impressive. Seemingly effortlessly, you set people at ease.

Ellen Brzezinski, one of Bill’s nurses, sent family members and Eals’s letter with this note: Mr Boyd got this letter in the mail today. I read it to him and barely made it through without crying.  What a tribute!

Roger Dower, one of Bill’s successors at President of the Johnson Foundation, noted his lasting impact on the institution: Bill had a diverse and sharp intellect, but also a deep passion and caring for improving the lives of people nationally and in Racine. His programs and conferences at the Johnson Foundation on the critical  role of quality education for all children, placed that topic squarely on the national and local agenda. The Foundation’s work on K-12 education, under Bill’s direction, remains as influential today as it was in the mid-1980’s and remains a focus for the Foundation today.

Bill believed deeply in the power of convening small groups to solve big problems – the principal activity of the Johnson Foundation at Wingspread then and now.  With his usual eloquence, Bill frequently said, “ while small group meetings may seem like frail weapons to take on the daunting challenges of our times, just properly used they can slay dragons.”

Bill gave me my first extensive tour of the Keland House on November 1, 2002. He saw this nuthatch through the window, when we paused on the steps, and remarked, “This is what I love about living in this house.”

In January 2019 I photographed this silhouette of the birds outside as we had lunch together in the family room.

Stacy Owens, Bill’s lead nurse, told me that Bill died peacefully, and that “he saw Karen just before he died.” Rest in peace, my friend. The world is richer for having known you.

I leave you with a photograph I took of the refrigerator at the Keland House when we were getting ready to enjoy Steven Freeman’s dinner: 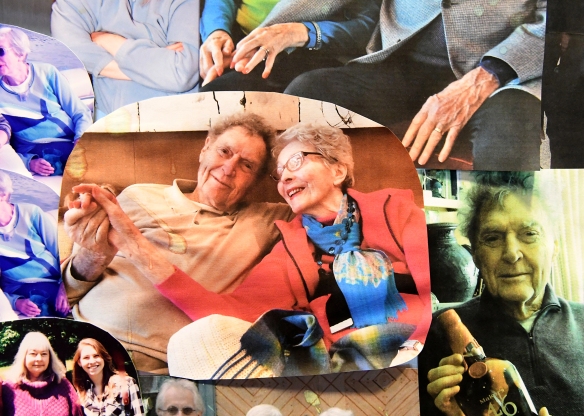 The sun rises over Annie Pfeiffer Chapel, left, and Danforth Chapel at Florida Southern College in Lakeland, Florida March 13. The college is the largest single-site collection of buildings designed by Frank Lloyd Wright. College president Dr. Ludd Spivey commissioned Wright to design the college campus master plan and the buildings in 1938. Twelve structures designed by Wright were built over a twenty year time span from 1938 to 1958. The Waterdome and the Esplanades are considered two of the 12 completed structures).

A thirteenth building, a Usonian home designed for faculty housing, was completed in 2013. It serves as a guest relations center for tour guests.

We had the privilege of a behind-the-scenes tour of the Wright-designed buildings on campus with Mark Tlachac.

The Annie Pfeiffer Chapel, with its carillon tower, below, is the best known of the Wright buildings. 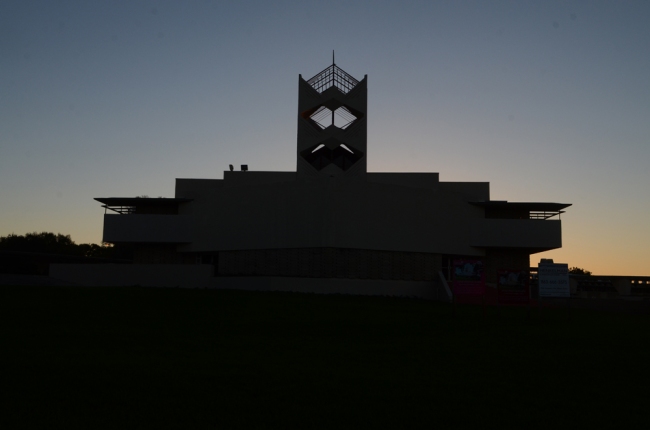 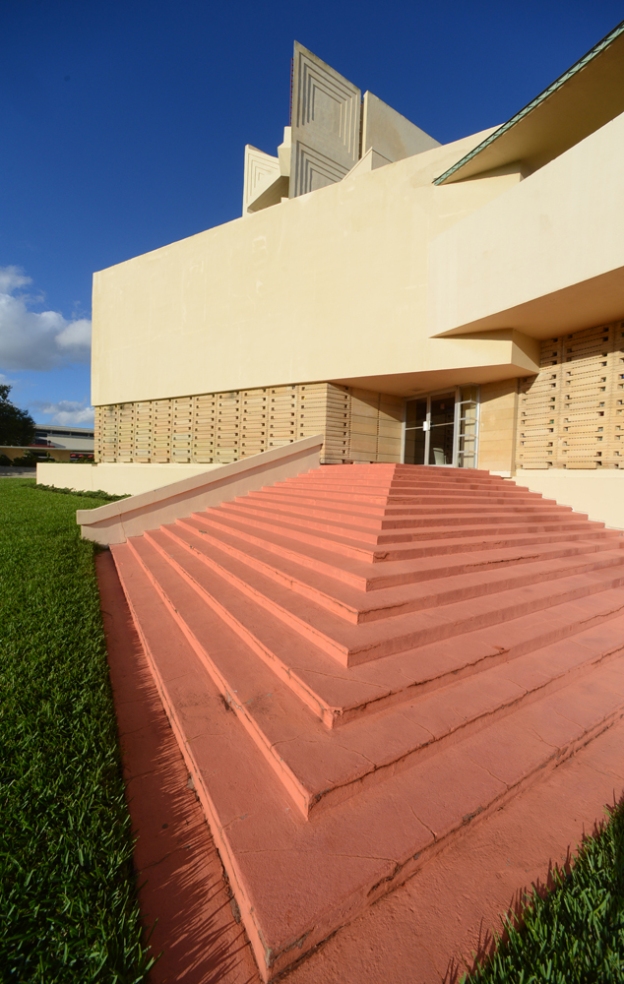 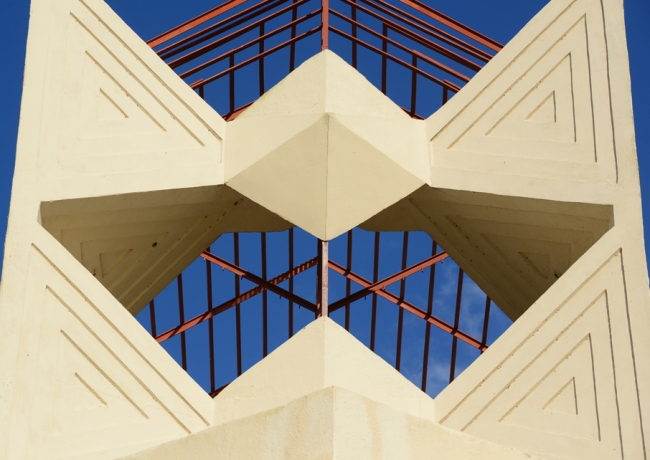 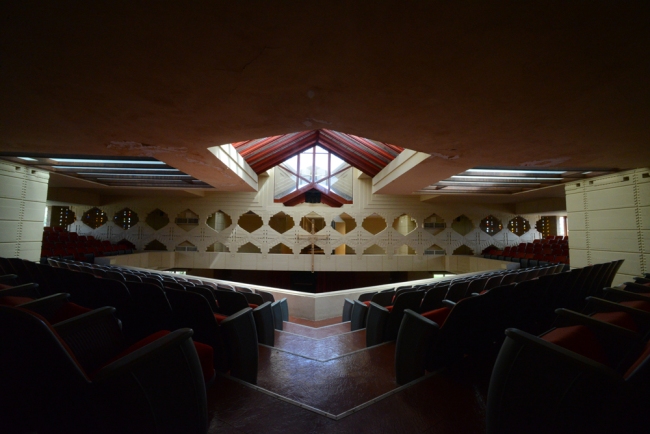 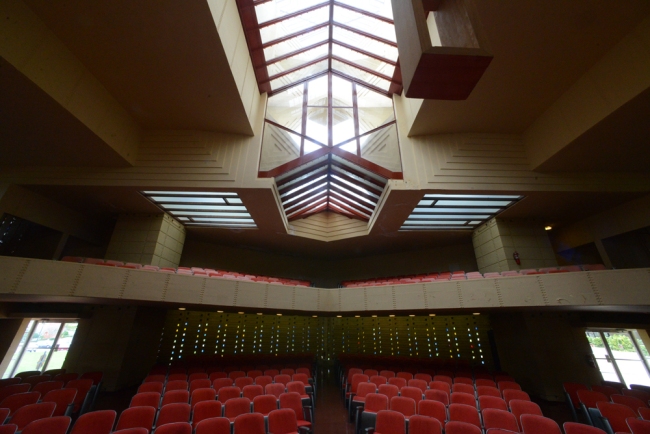 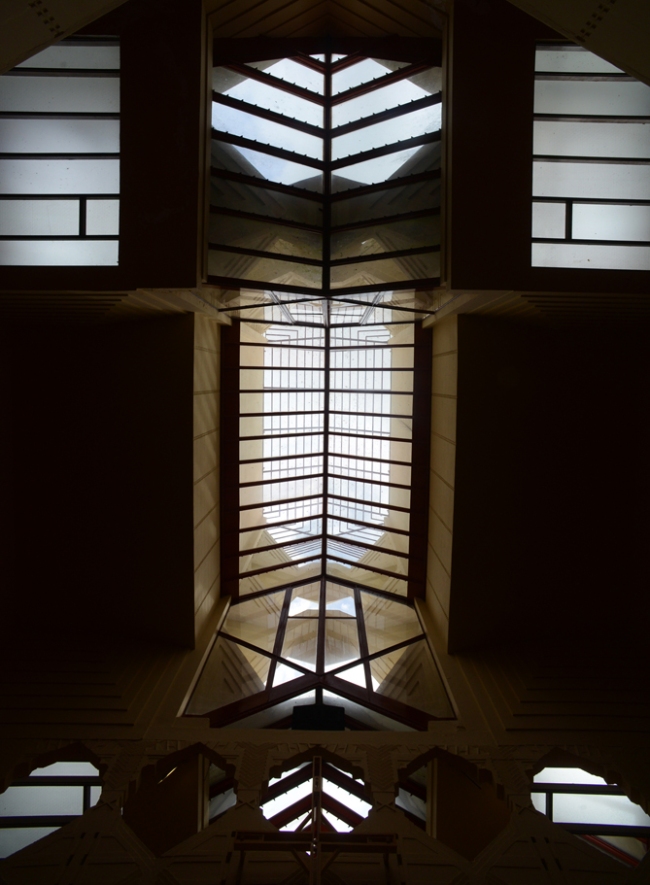 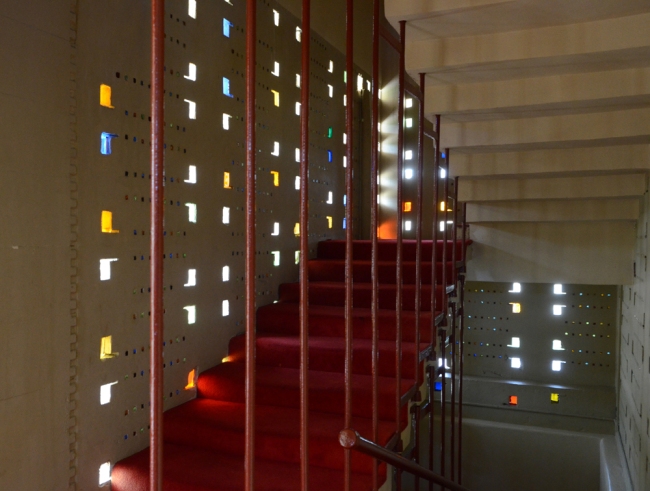 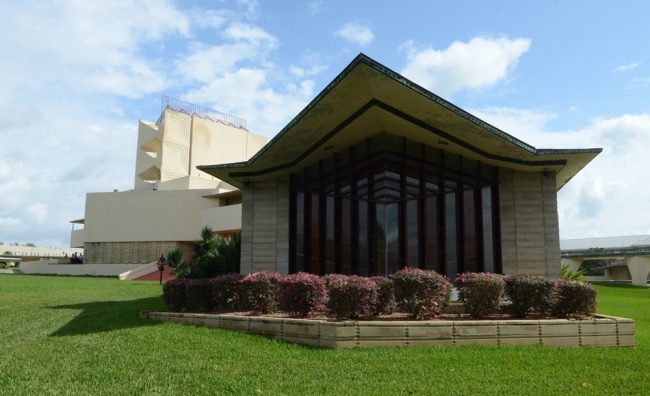 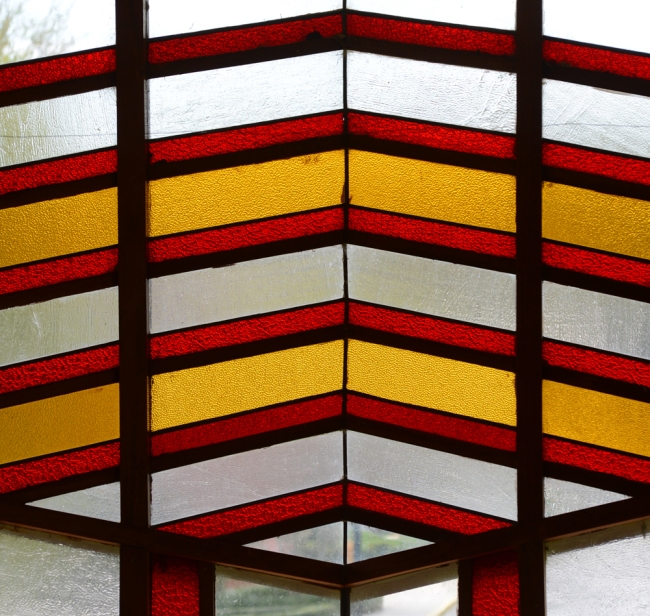 The Esplanades, which Wright designed to shield people from the sun and rain, were my favorite subject. Wright designed them as evocative of citrus trees. The first photo is the projected shadow of one of the columns at sunrise. 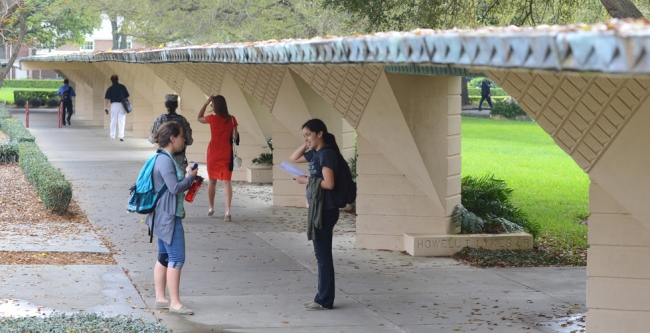 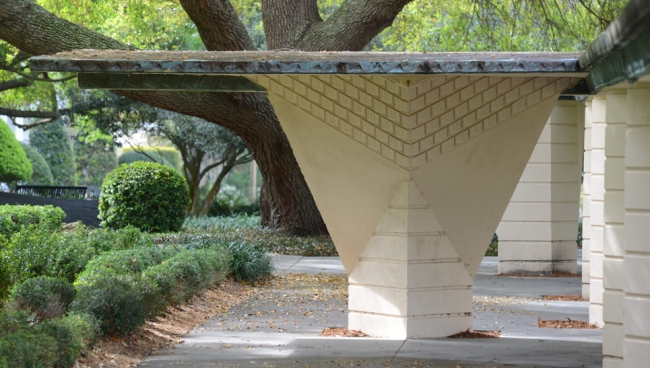 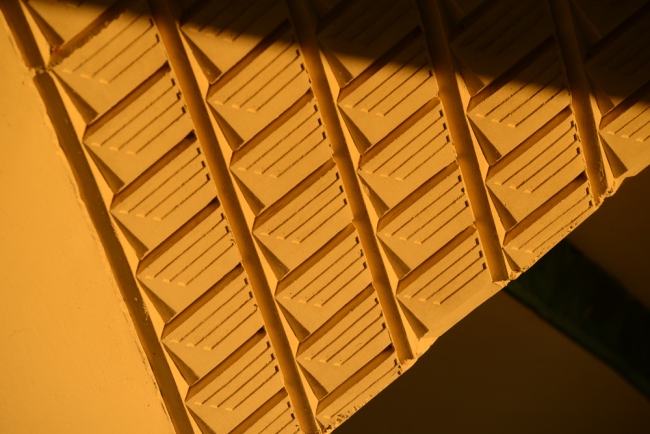 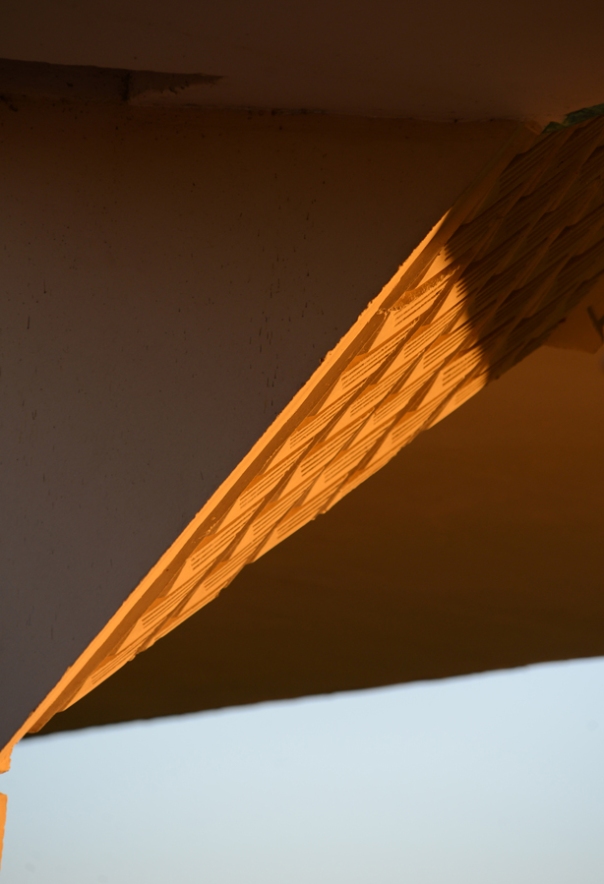 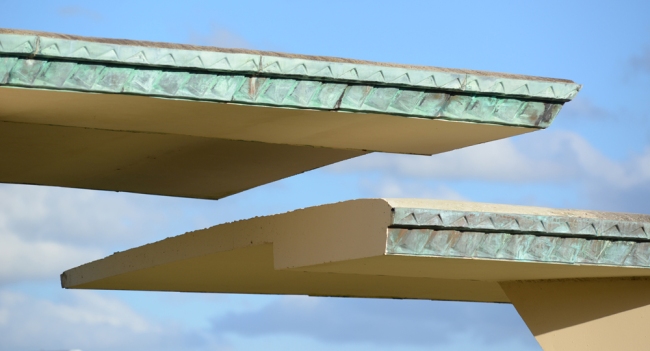 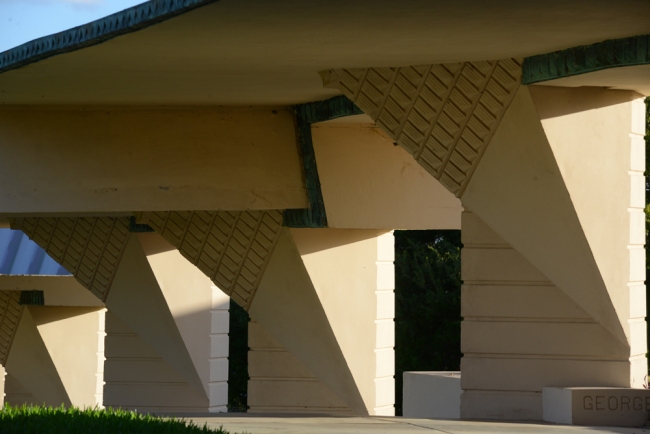 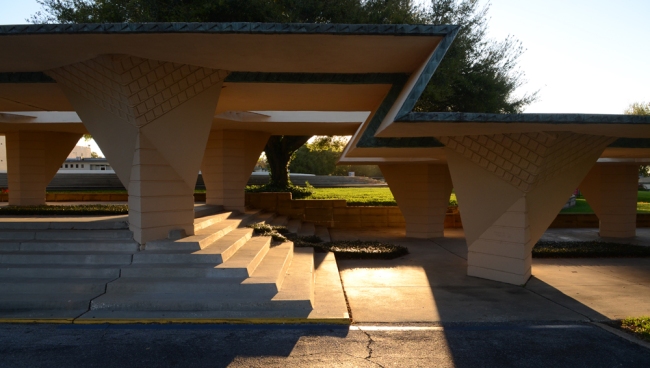 The ceiling of the reception area of the Fine Administration Building reminded me of ceilings in Price Tower.

I also liked the original Roux Library. The building has been remodeled, but Wright’s lower level reading room is still similar 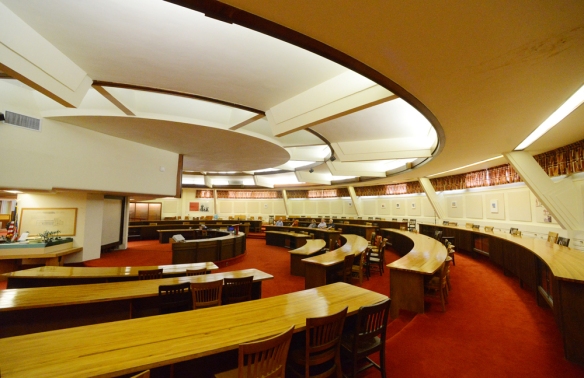 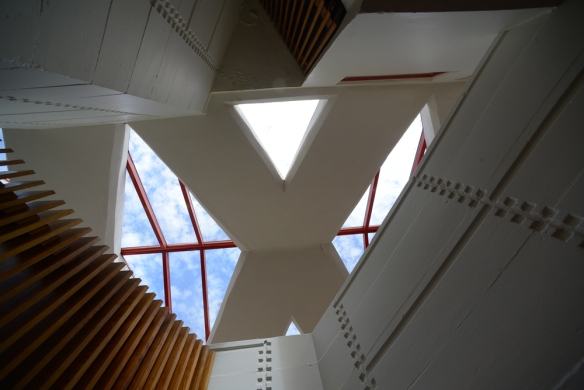 Jeff Baker, an architect from Albany, New York, is working with the college on the restoration of many aspects of the buildings. 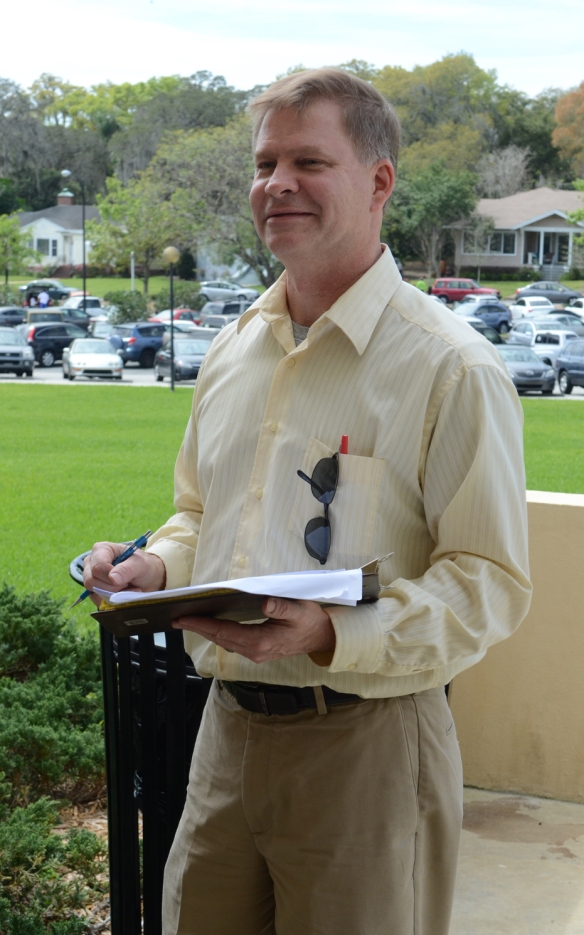 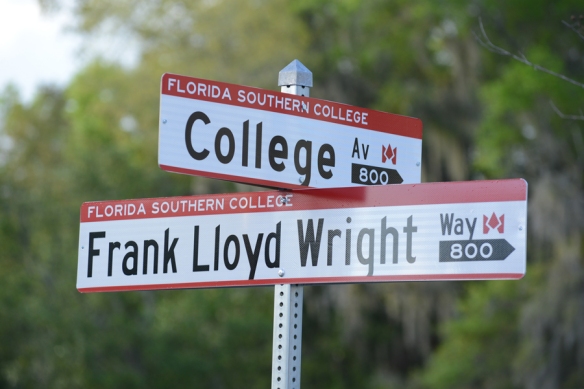