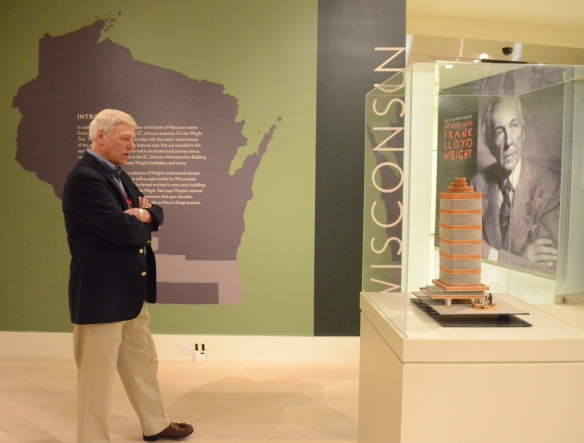 The sixth iteration of SC Johnson’s annual The SC Johnson Gallery: At Home with Frank Lloyd Wright exhibition opens today in Fortaleza Hall on the company’s campus in Racine, Wisconsin. The centerpiece of the exhibition, titled On the Wright Trail, is the display of 26 miniature scale models of Wright’s architecture by retired architectural draftsman Ron Olsen of Janesville, Wisconsin. One of the models is of the gate lodge at Penwern, Wright’s estate for Fred B. Jones on Delavan Lake, Wisconsin (1900-1903):

The exhibition coincides with both the summer-long observances of Wright’s 150th birthday (June 8) and the inauguration  of the Frank Lloyd Wright Trail in Wisconsin. A ceremony marking the launch of the Trail was held May 10 in the Great Workroom of Wright’s landmark SC Johnson Administration Building (1936). Olsen and his wife, Judy, were photographed when they saw the exhibition for the first time after the Trail ceremony. The exhibition includes a video interview with Olsen:

“SC Johnson is proud of its Frank Lloyd Wright-inspired architecture,” said Kelly M. Semrau, Senior Vice President – Global Corporate Affairs, Communication and Sustainability, SC Johnson. “In celebration of Wright’s birth in Wisconsin 150 years ago, we are thrilled to offer visitors of On the Wright Trail a unique opportunity to study the architect’s design practice across different areas, media and time.” 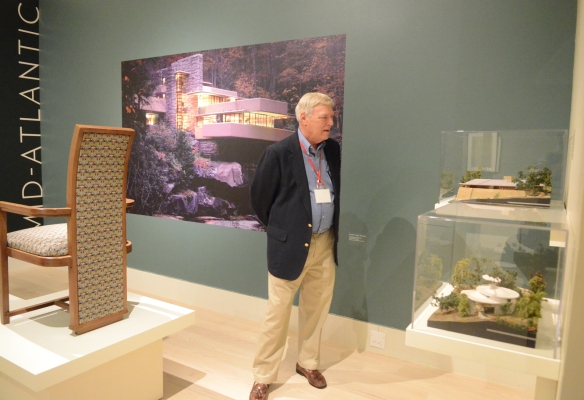 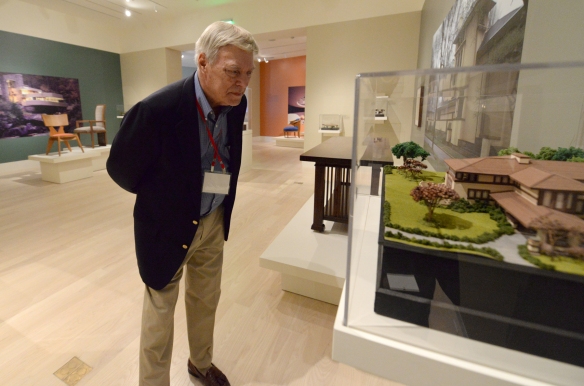 Frank Lloyd Wright’s 148th birthday was celebrated at a traditional gathering at Taliesin Saturday June 6 and a day later at SC Johnson in Racine, Wisconsin. Wright designed the company’s Administration Building in 1936 and Research Tower in 1943/44.

Sean Malone chats with Minerva Montooth during the reception at Taliesin. 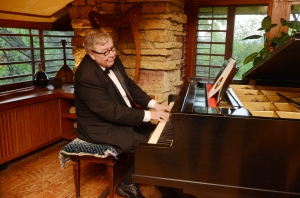 The reception at Taliesin was followed by dinner – including a birthday cake – and music at Hillside School:

SC Johnson’s celebration was held in Fortaleza Hall, designed by Lord Norman Foster and partners. There were two sheet cakes and a large cake modeled after Wright’s buildings. The base below the model building was made from compressed Rice Krispie treats and chocolate mix. 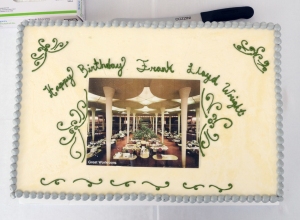 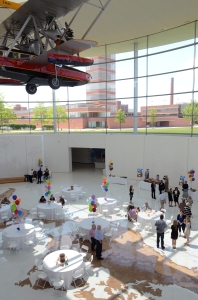 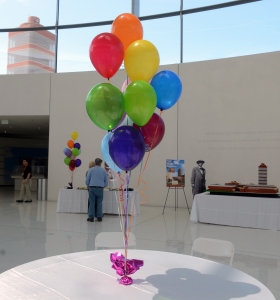 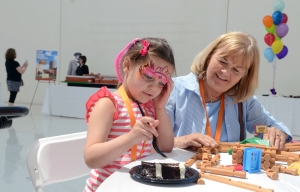 Bob and Jeanne Maushammer wanted their picture taken with a life-size cutout photo of Wright. The Maushammers, who have seen several hundred of Wright’s buildings, were in their hometown of Racine to celebrate their 50th wedding anniversary.

The third iteration of “At Home with Frank Lloyd Wright” opens Friday in Fortaleza Hall on the SC Johnson campus in Racine. The exhibition is entitled “The Two Taliesins,” but in addition to Taliesin and Taliesin West, it also includes what has sometimes been referred to as Taliesin East, Wright’s suite at the Plaza Hotel in New York. Workers were completing the installation when I photographed it last week.

A publicity statement from SC Johnson describes the exhibition:

‘Wright used both homes as laboratories where he could develop and test his architectural ideas. The exhibit will compare and contrast how Wright incorporated his signature and revolutionary “organic” design concepts into his own homes, each of which reflected the very different landscapes and climates in which they were built.

‘Artifacts from Wright’s Wisconsin and Arizona homes will be on display that simulate their natural settings and convey their significance to the Taliesin concept. The exhibit will also feature a collection of rare photos and videos that show Wright at home. In addition, visitors will learn about the central role that color played in Wright’s designs of the Taliesins.”

The gallery opened in 2012 with an exhibition devoted to Wright’s Prairie-style homes. His Usonian homes were the theme of the 2013 exhibition in the gallery. 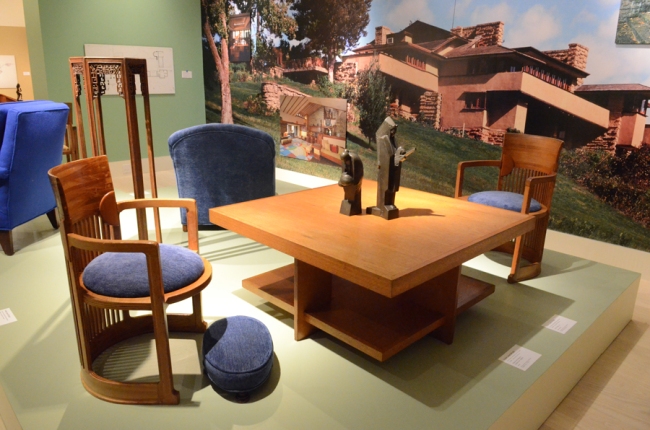 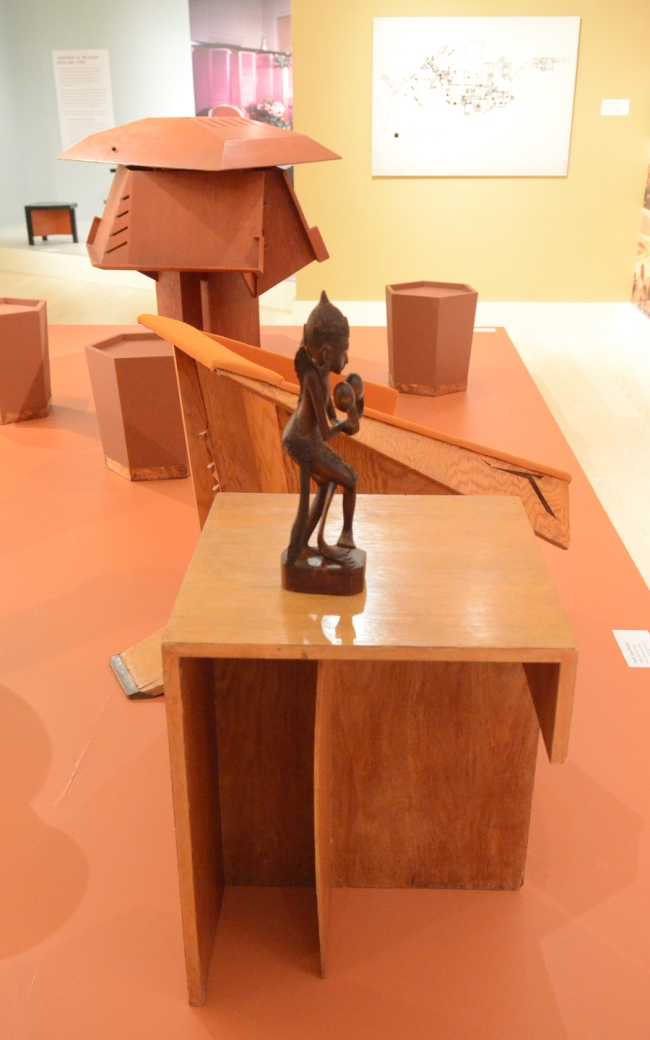 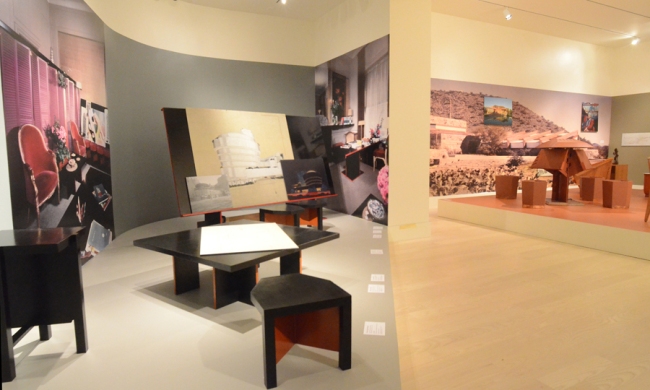 The Wright-designed SC Johnson Research Towers opens for the first public tours ever on Friday, as well. I have had the privilege of photographing several times during the 2013 restoration of the tower and the installation of the exhibits in the Tower over the last few weeks (see previous posts). For information about making reservations for tours, go to: http://www.scjohnson.com/en/company/visiting.aspx