Something wasn’t right today. I was not committed to taking pictures as I accompanied my 11th Road Scholar Frank Lloyd Wright trip, my second in a month, to sites in Milwaukee today.* As I have written in past blogs, I try to see and photograph something new every time I visit a familiar Wright site, but I did not feel photographically inspired this trip. When I got to Frank Lloyd Wright’s Burnham Block, our first stop, I thought I had seen all the pictures there were to take, on the trip in May:

So, I left my workhorse cameras on the bus and carried just my iPhone 11 Pro. Then I saw something that struck me. I gingerly took out my phone and snapped a picture:

I put the phone back in my pocket, thinking it would be a “one and done” day. I took two photos of Road Scholars eager to enter the American System-Built B-1 Richards House, and again figured, that would be it for the day: 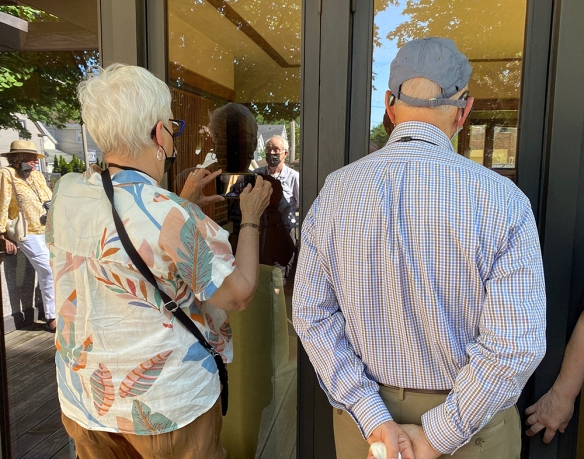 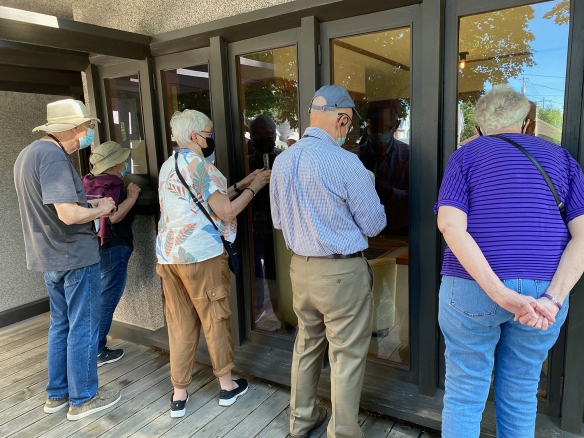 Ah, but there was more to come, above me, and inside the house: 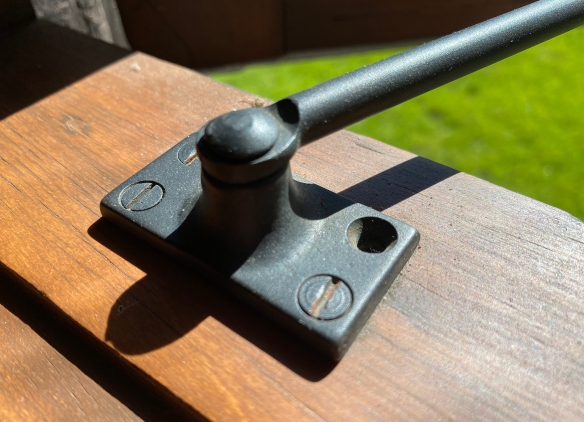 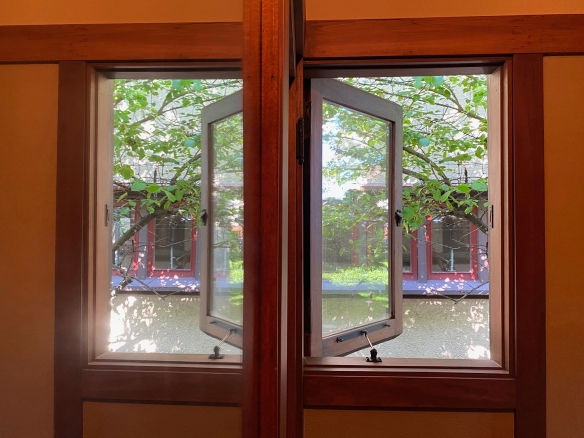 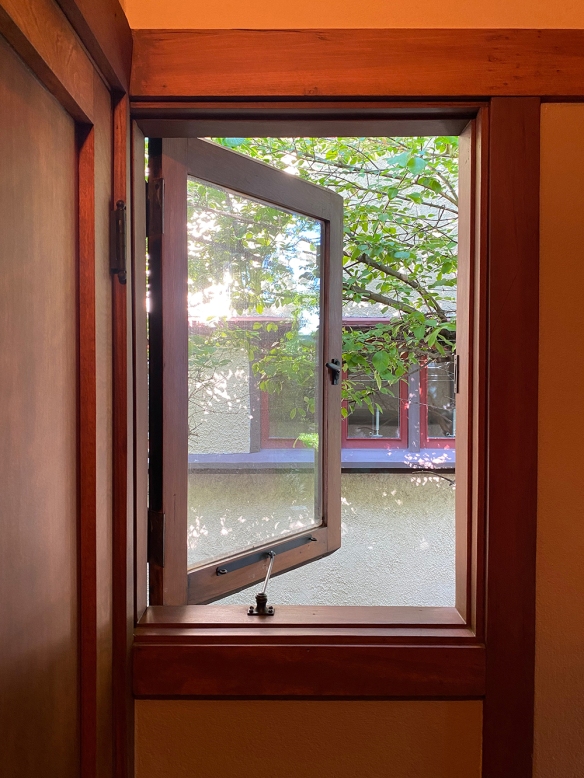 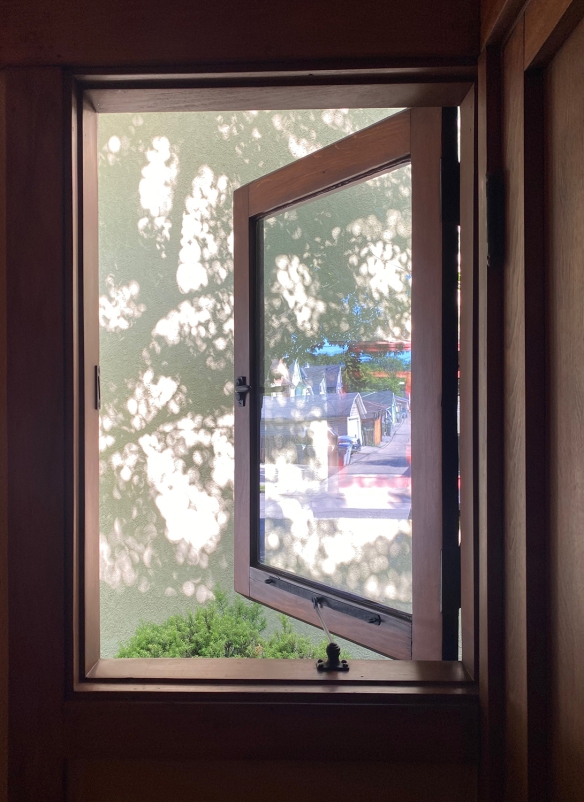 Done for the day? Maybe, but I decided to bring the “real” cameras with me when we got to the Annunciation Greek Orthodox Church in Wauwatosa. I was immediately struck by the cloudless and rich blue sky. It seemed in synch with the blue color scheme of much of the church building. First, was the obligatory “record” snapshot before pushing my eye:

The “crown of thorns” below the domed roof presented myriad photos: 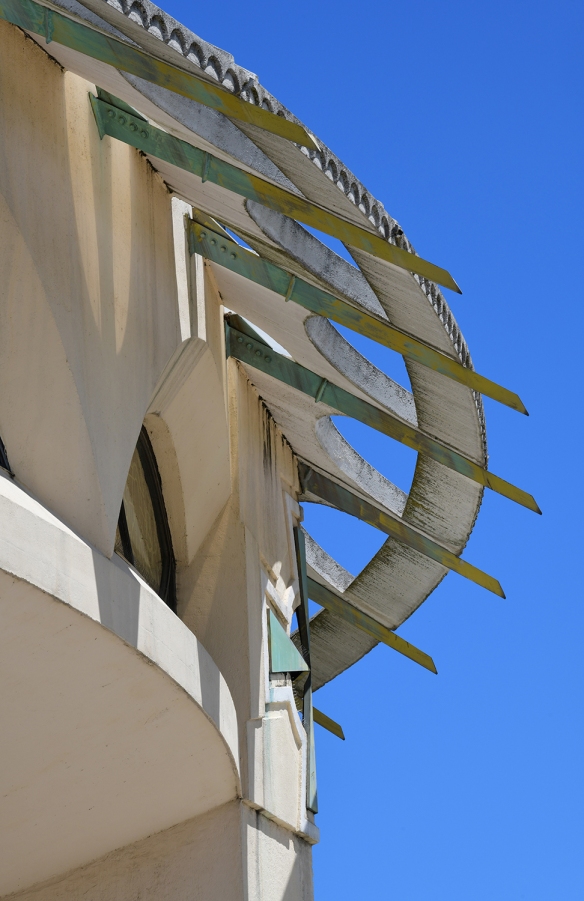 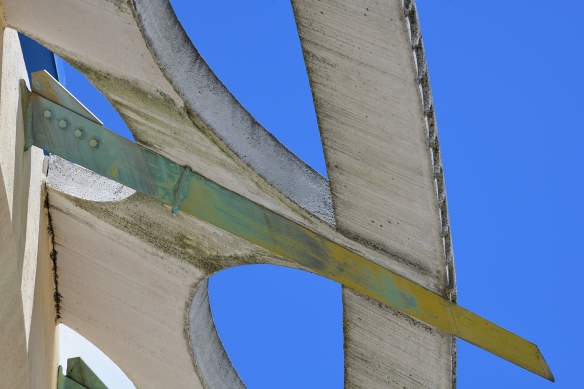 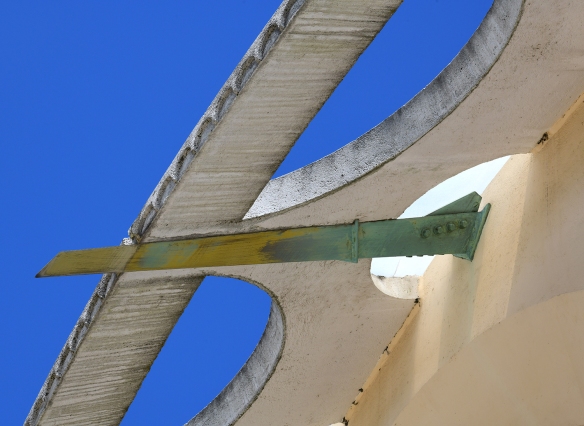 Then I came to the entry way and its cantilevered canopy: 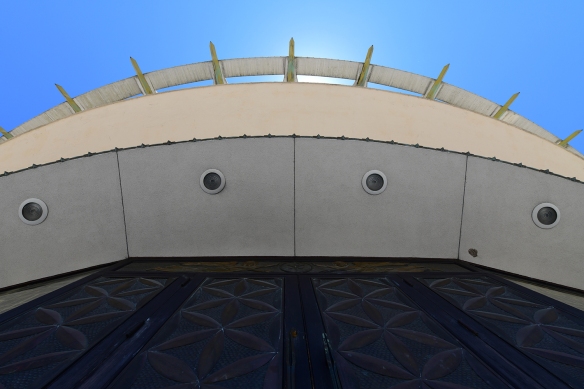 There are thousands of two inch by two inch ceramic tiles above the roof of the canopy. Our docent, my friend Cathy Spyres, explained that these are the same tiles that were on the original roof of the church. The original tiles were not replaced after they started popping off the roof. 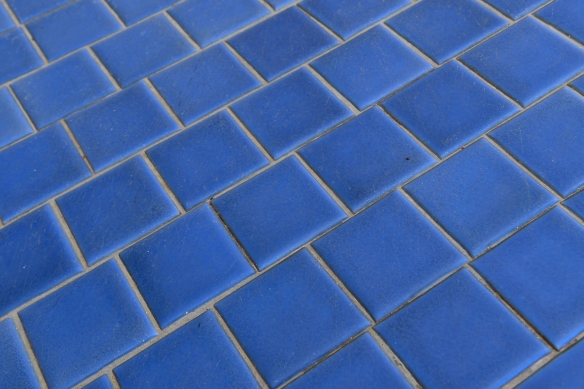 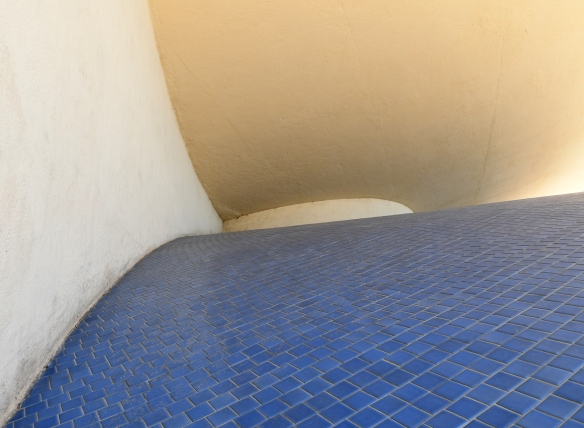 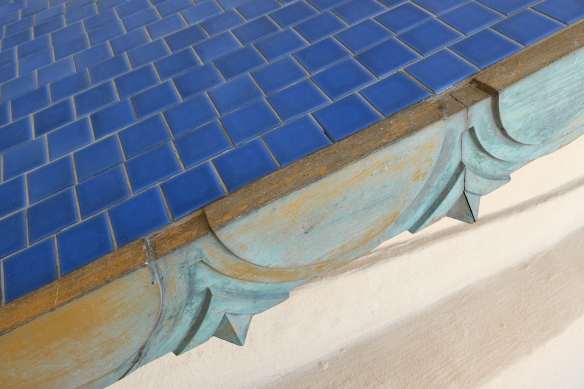 Then, onto a quest to see something new inside the church: 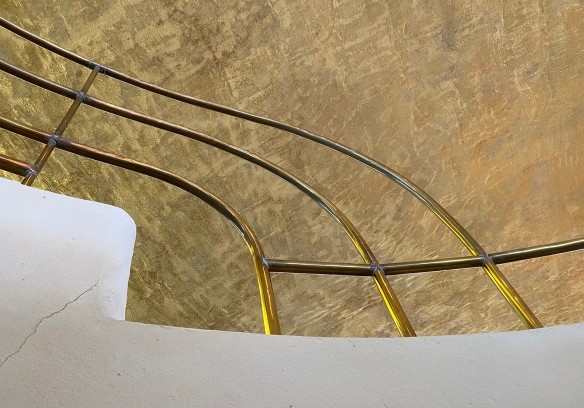 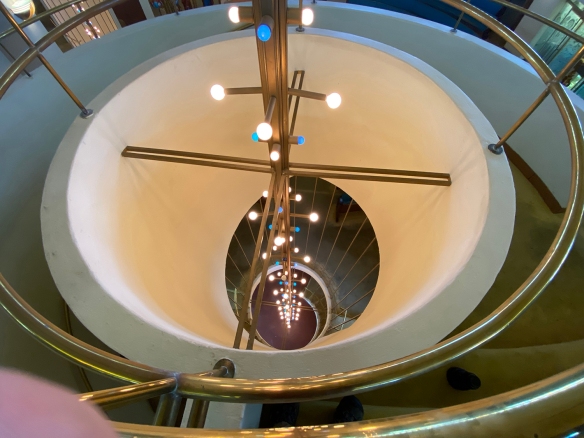 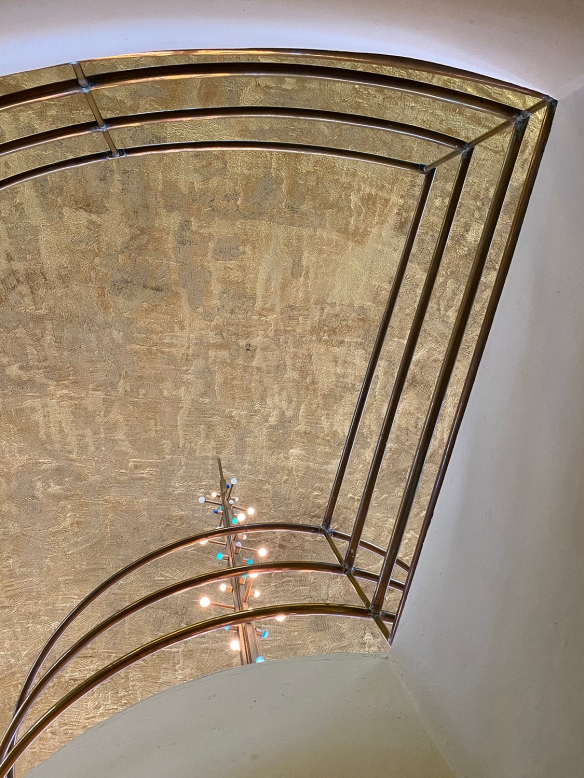 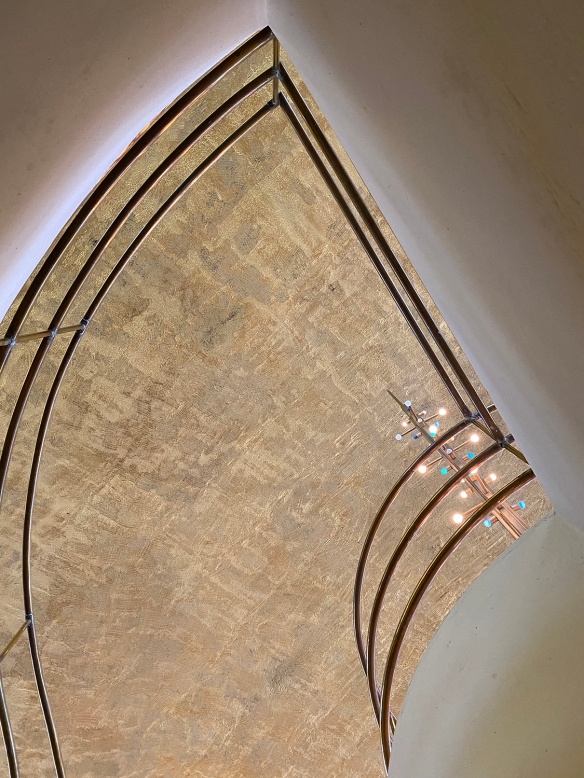 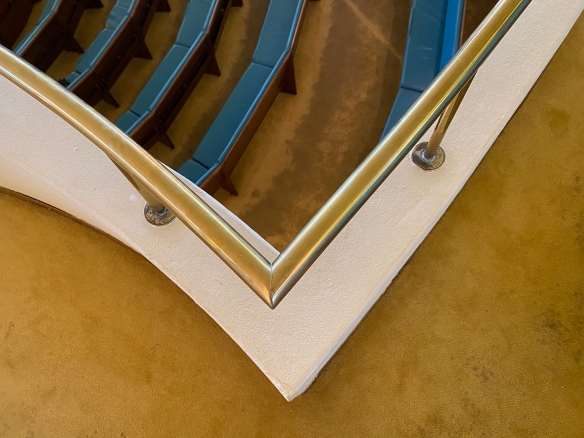 Spyres told the guests that blue (as well as gold) is one of the dominant colors inside and outside the church because it is part of the Byzantine heritage. So was the sky, I thought, as I heard her explanation.

I was in touch a few months ago with the director of a Wright site to take photos for a forthcoming Wright book by a university professor. The director was critical of one of my earlier photos from the site because it had an “on the spot look.” I asked for clarification: “On the spot means it looks like a hand-held shot. It isn’t carefully studied. It has a casual look.” I make no apologies for my style of working: “Casually,” and “hand-held.”

Photography literally means “writing with light.” Today the light was perfect for me to write Wright.

*The guests’ week-long itinerary begins in Chicago and Oak Park, continues to Racine, where I join them, then on to Milwaukee, Madison, and Spring Green. They see 12 Wright sites in Wisconsin during this deep immersion into the World of Wright:

There are myriad celebrations of the sesquicentennial of Frank Lloyd Wright’s birth. It is a challenge for curators to decide how to present his career for both people well-versed in his work as well as for people who may be exposed to his designs for the first time. The Milwaukee Art Museum celebrates his work with drawings and artifacts related to his legendary Wasmuth Portfolio of 1910-11. The exhibition, “Frank Lloyd Wright: Buildings for the Prairie,” opened Friday July 28.

One of the highlights of the exhibition is a wood case for a rare original copy of the Wasmuth Portfolio. This portfolio was donated to the museum by the Demmer Charitable Trust in 2014. Wright had hoped to promote his revolutionary designs and ideas with the portfolio. At a crossroads of his career, he sold some of his valued Japanese prints to help fund the project. His reputation was tattered by his affair with Mamah Borthwick Cheney, a client, after they left their respective families in 1909 and traveled to Berlin. He looked forward to beginning anew in America after his return in 1911. But, some 500 copies were destroyed in the 1914 fire at Taliesin; only about 30 copies survived. 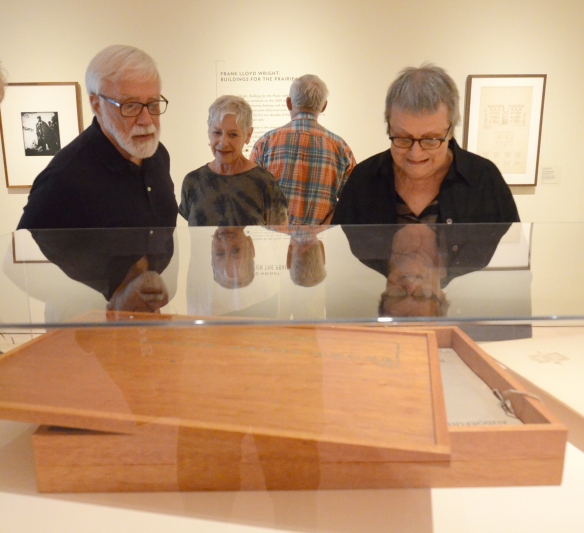 Robert and Jeanne Maushammer, left and right, and Diane Kehl, among the first visitors to the exhibit, study the wood case and portfolio. The showcase with these artifacts is at the north entrance to the exhibit hall. The Maushammers came from Virginia to see the exhibit.

The museum exhibit highlights Wright’s work starting with the Winslow House (1893)  which in 1954 he deemed his first Prairie-style home, and including more than a dozen other commissions presented in the Wasmuth Portfolio.

Visitors can use touch-screens to enlarge and studies drawings in the Wasmuth Portfolio including ones that are not on exhibit.

While most of the work displayed are drawings and floor plans from the Portfolio, the exhibit also includes a number of artifacts, some loaned by the SC Johnson Company of Racine (which has them on longterm loan from the Frank Lloyd Wright Foundation). 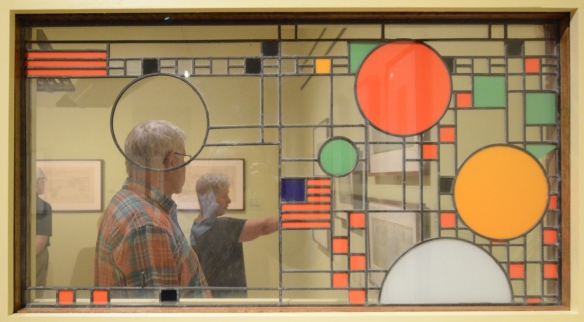 SC Johnson lent the museum one of the well known colorful windows from the Avery Coonley Playhouse.

One of the leaded glass cabinet doors for the Heath House in Buffalo (1905) is displayed.

Wall sconces and a hanging lamp from the Heath House are also on display.

Other architects and designers worked with Wright before he left for Berlin. The Wasmuth Portfolio was important to their careers, as well. George Mann Niedecken, a Milwaukee designer, worked closely with him on a number of the Prairie-style homes, designing murals, carpets, and furniture. The museum is home to the Niedecken archives, and some of his work is on exhibit.

Niedecken designed this writing desk, daybed, and lamp for the Edward P. Irving home in Decatur, Illinois. The design was in the concept stage when Wright left for Europe. It is thought to have been mainly completed by Marion Mahony, his chief draftsperson, under Wright’s guidance.

The exhibit runs through October 15. An exhibition catalogue is on sale in the Wright gift shop at the north end of the exhibition. The price is $17.95 for members, $19.95 for non-members. For more information: