Frank Lloyd Wright embraced nature. But nature does not always embrace his work. Take for example the Thomas P. Hardy House (1904-05), built into a bluff above Lake Michigan, south of downtown Racine, Wisconsin.

This postcard, from the voluminous Patrick Mahoney Wright archives, shows what the house looked like in July 1906, around the time that Hardy moved in. Regrettably there is no companion photo showing the full expanse of land below the house.

This photograph, also ca. 1906, shows the lake side of the house, but does not give us an idea of far away the lake was from the property line. Photo © 2020 Frank Lloyd Wright Foundation. All rights reserved.

The house was above the 14th Street Beach, and many people mistook it for a bathhouse and stopped there to change into their swim suits, recalls Anne Sporer Ruetz, who grew up there between 1938-1947.

This photo, courtesy of David Archer, who grew up in the house between 1947 – 1957, shows a fence separating the public land from the private land.

Schuyler and Peterkin Seward, stewards of the house between 1957 – 1963, took a picture beyond the fenceline, showing how much land there was below the house. That land is now under water. Photo courtesy of Abbi Seward. 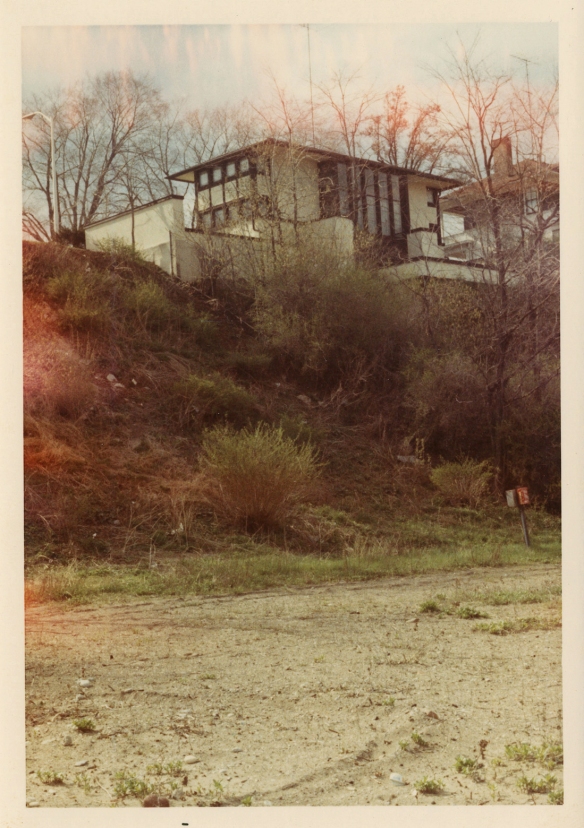 The landscape changed dramatically a few years after Jim and Margaret Yoghourtjian bought the house in 1968 and took this photograph.

The City of Racine decided to alter the nearby shoreline northeast of the house, over protests of the residents in the early 1970s. Jim Yoghourtjian told me that they lost an estimated 100 – 125′ of land below the house. And that brings us to today, when Lake Michigan is experiencing near-record high levels and has overtaken much of the land below the house. The fence put in a few years ago by the Szymczaks to give them some privacy from people walking along the shoreline is now largely under water…there is no more walking path. A small dock no longer stops short of the small beach area the owners could launch a kayak from. It was virtually at water’s edge last fall.

Fear not, the house is not threatened, but the situation is serious enough that the Szymczak family and neighbors had to hire Ray Hintz, a local contractor, to place 3 – 5 ton boulders at the base of their property this summer. The Szymczaks estimated that they have lost 40 -50 feet of land in the last seven years. Neighbors’ land is more seriously threatened as parts of their bluffs have been eroded.

Local and state government representatives have looked unsuccessfully for possible sources of Federal, state, and local funding to help underwrite or create a loan fund to help shoreline homeowners in Racine and Kenosha counties bear the expense of the revetment. One neighbor emailed me, “We paid full freight (the whole $$), further underscoring neighbors’ commitment to these historic properties.”

The lake, as viewed from the living room balcony and the base of the bluff is, indeed lovely. The sound of the waves lapping at the shore can be soothing. But these days, neither is always welcome. 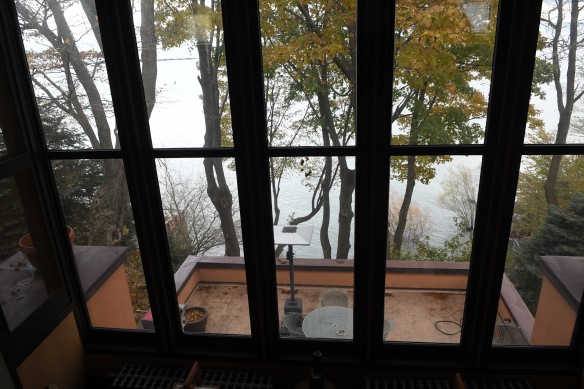