Steelcase and the Frank Lloyd Wright Foundation announced a new collaboration a week ago, in advance of Wright’s 155th birthday (June 8). The famous desk and desk chairs that Wright designed for the SC Johnson Administration Building (1936) in Racine, Wisconsin will get new life as Steelcase will “revisit, reinterpret, and reintroduce Wright’s designs, as well as co-create novel concepts rooted in his principles to provide products that enhance how we live and work today.”

The desks evoke the streamlined building itself: 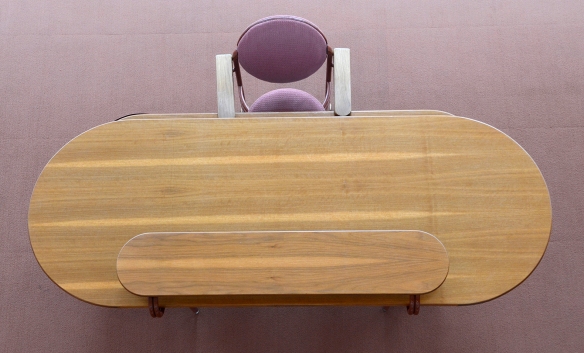 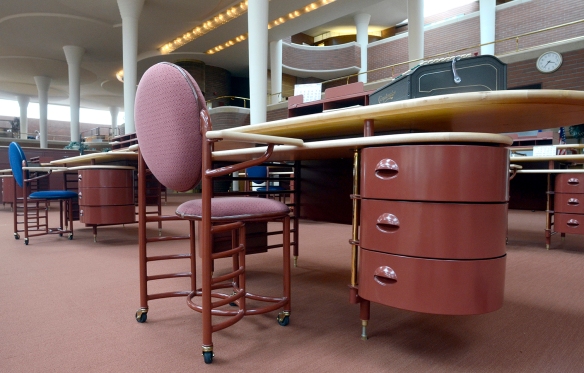 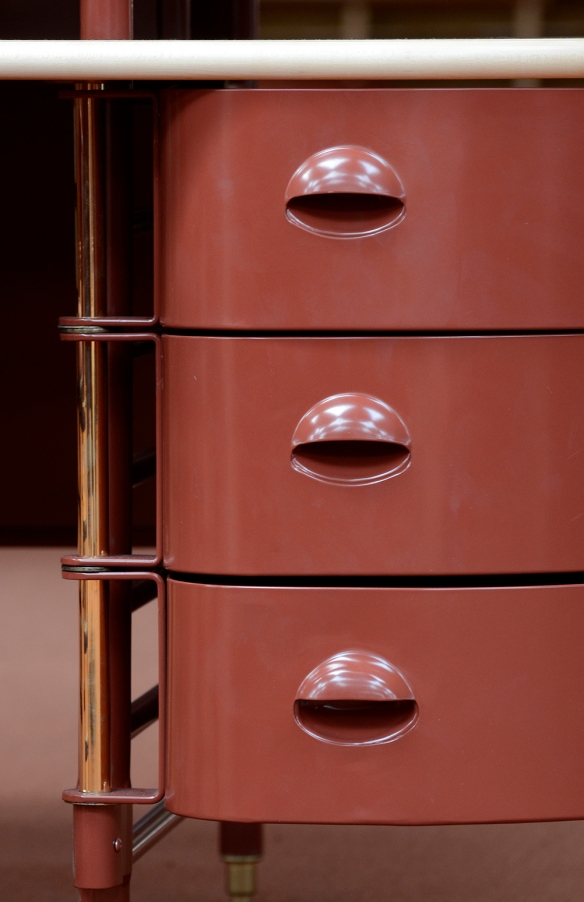 Steelcase showed its appreciation for Wright giving them this commission during the Great Depression, when they were known as the American Metal Furniture Company, by purchasing and fully restoring Wright’s Meyer May House (1908) near their company headquarters in Grand Rapids, Michigan. The restoration, under the direction of Carla Lind, took from 1985-1987. Steelcase also bought the house next door and made it into the visitors’ center for the Meyer May House: 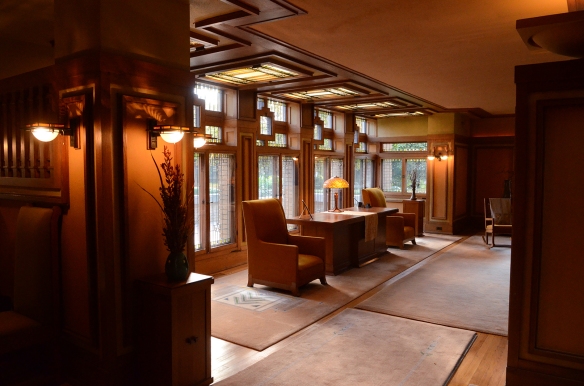 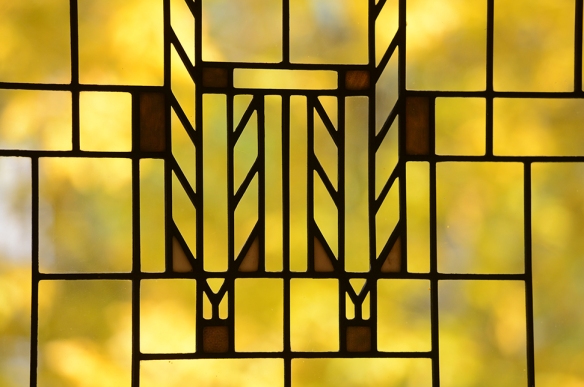 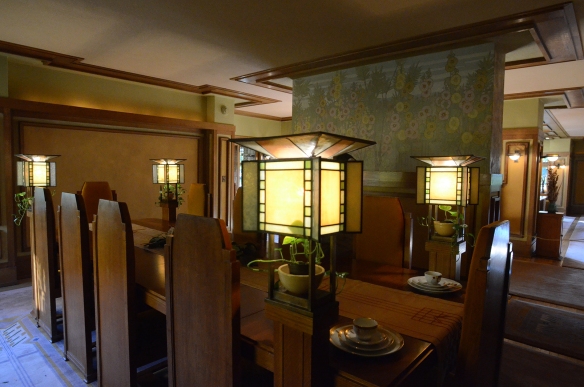 I thank Don Dekker of the Meyer May House for allowing Patrick Mahoney and me to photograph the house without other guests in it, during the Frank Lloyd Wright Building Conservancy conference in Grand Rapids in 2013.

The announcement about the collaboration between Steelcase and the Foundation:

Scroll down to see earlier blog posts or articles… 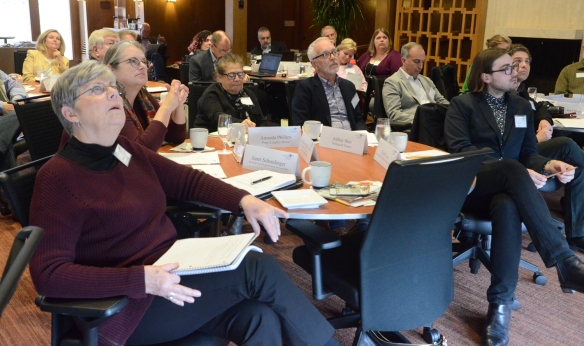 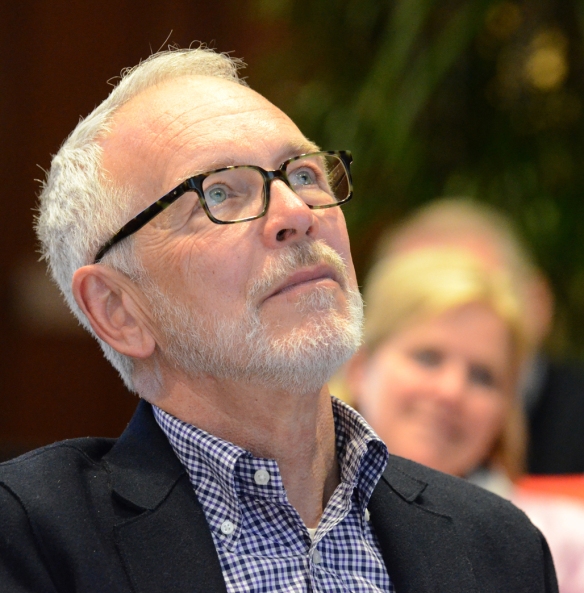 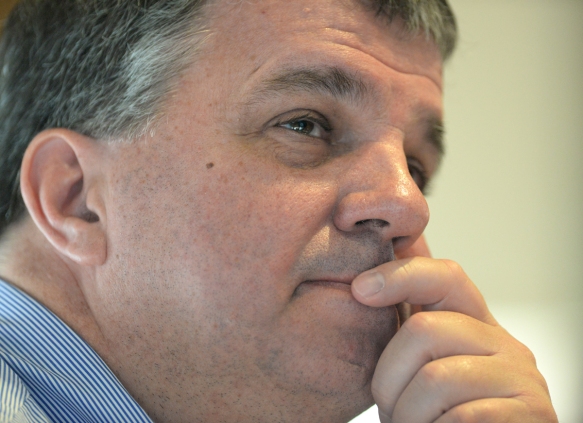 SC Johnson has filed a federal lawsuit in New York against the famed auction house Sotheby’s and a California man, seeking the return of a Frank Lloyd Wright-designed desk and office chair. Both pieces, valued at a combined estimate of $480,000 to $720,000, were slated for the auction block on Wednesday. But SC Johnson filed suit on Tuesday in U.S. District Court in the Southern District of New York seeking to block those items from being auctioned off to the highest bidder. Instead, according to the lawsuit, the Racine-based company wants the items back, claiming it is the rightful owner of all such furniture. The (Racine) Journal Times asked me to write a story for their readers about the background of the furniture.

Jack Ramsey (general manger of SC Johnson)…called up one day and said “we’ve got this crazy architect over here doing our building…do you want to come over and talk with him about furniture?” – David D. Hunting, founder of Steelcase, Inc.

SC Johnson was weeks away from breaking ground on a new office building by J. Mandor Matson, a Racine architect, in July, 1936 when Ramsey was persuaded to meet with Frank Lloyd Wright. Matson had designed what Wright described as a “fancy crematorium.”

Ramsey penned a memorable note to H.F. Johnson Jr., the company president after the meeting. Wright was the architect who understood what the company wanted in its new offices, “gosh he could tell us what we were after when we couldn’t explain it ourselves.”

Johnson met with Wright. He recalled that they quarreled all day, agreeing only on their choice of car, the streamlined Lincoln Zephyr, but he dismissed Matson the next day.

Buildings had souls for Wright. For SC Johnson, he designed what has been called a “corporate cathedral,” a streamlined building. Wright did not leave the task of furnishing his buildings to what he called “interior desecrators.” He wrote, “It is impossible to consider the building as one thing and the furnishings as another.”

Wright designed forty different pieces of streamlined furniture for the building. Conventional desks were rectangular, but the curves and horizontal planes of the Johnson desks evoke the lines of the building. Drawers swung out, rather than pulling out. The backs of the chairs swiveled for ergonomic comfort. The original chairs famously had three legs. They were rebuilt with four legs after people complained that they tipped over too easily. 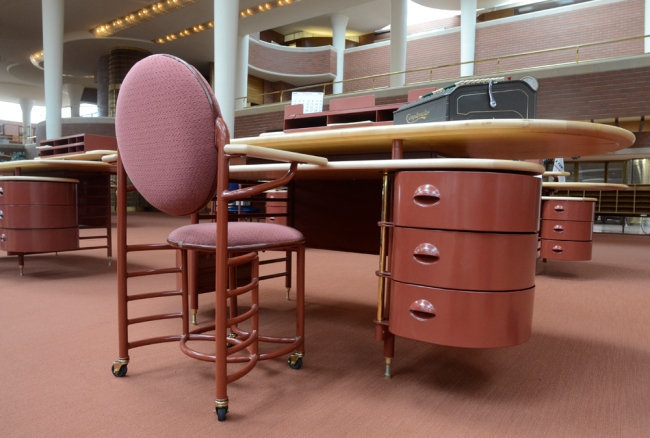 Calling the furniture “a living artifact,” Kelly Semrau, Senior Vice President at SC Johnson, writes “We share this philosophy (Wright considering the building and furnishings as a whole), and believe it is our responsibility to guard and protect not just the building, but also the furniture…It’s a part of our legacy; our family story.”

Steelcase bought and restored the Meyer May House near their headquarters in Grand Rapids, Michigan, as a way to thank Wright for the SC Johnson commission which came during the Great Depression.